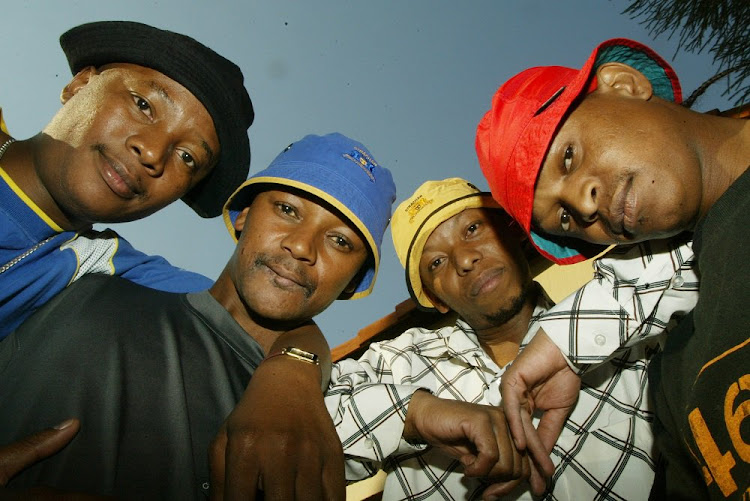 Trompies' fire still burns and they want to school the new kids on what music is.
Image: Via Twitter/SowetanLive

Being part of any group is challenging but being part of a legendary kwaito group that has produced major hits, changed the culture and has members with flourishing solo careers is another level of difficult and Trompies can testify.

The legendary kwaito group, who have had to explain themselves out of countless break-up rumours and drama in the group, told TshisaLIVE it hasn't been an easy road. They said there were many times being part of the group left them frustrated to say the least.

"No group or collective can say that they do not disagree and argue. It's a natural part of group dynamics. While it is frustrating, it helps people get to see a different opinion. For us, collaboration, co-creation and a celebration of our different strengths and weaknesses is important in our talent process," they told TshisaLIVE.

Trompies said a lot of the time, they wouldn't even realise there was conflict until they got to the music making process. Then they had to stop to work it out, unless it worked for the song.

All members of the group, Spikiri, Jairos, Mahoota and Eugene, are all still making music. Over 30 years since they broke into this industry, the four artists have managed to maintain their friendship, which began way before Trompies.

They explained that they've had to learn to accommodate each other's changing priorities.

"It has been difficult but we had to grow as people to explore other opportunities. But we certainly make time for each other and Trompies as an entity."

Trompies also (again) squashed rumours that Mahoota had "abandoned" them, saying they understood where he was coming from with his decision to split his time between Trompies and his solo career.

"Mahoota's brand is growing and we support that fully. We understand that he has to nurture that, but that does not mean he's not a critical member of the team or is not missed, we come far together from little boys in Ndofaya. We are planning big things for our fans as Trompies and he is very much a part of that. He will be with us at Red Bull Music Festival this April," they said.

Trompies is a headline act at the Red Bull Music Festival which will be taking place in April. Although the group hasn't faded out like many of the people they came up with, they emphasised how grateful they are to still be headlining acts after decades in the industry.

"We are part of a six-day festival that will be featuring 80 artists across JHB. Maybe we will get to make a song with Destruction Boyz during the Red Bull Music Festival. We are also looking forward to performing with Moozlie. We've heard that she's a young Brenda Fassie with a Lebo Mathosa spirit and so we're keen to see that ourselves."

The kwaito group will be hosting Kwaito Night as part of the festival that happens over a number of days.

Someone come clean the crumbs because it just gets more and more messy.
TshisaLIVE
4 years ago

When we talk about legendary actors... we are talking about the likes of Thembi Mtshali whose track record in the industry speaks for itself. But ...
TshisaLIVE
4 years ago

No guys! Polygamist Musa doesn't have threesomes with his wives

An ambiguous post on Instagram from Musa Mseleku's third wife, MaKhumalo, set the internet in a bit of a tizz after they assumed that she was hinting ...
TshisaLIVE
4 years ago