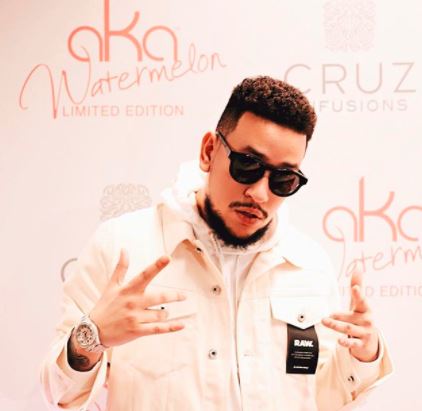 Rapper AKA is so over "beef" with Cassper Nyovest.
Image: Via Instagram/AKA/Blaq Smith

Despite both Cassper Nyovest and AKA attempting to (kinda) distance themselves from their beef, as far as Twitter is concerned the beef is still very much alive but AKA is tired of it.

AKA took to his Twitter to explain that he is totes over the beef between him and Cassper.

The rapper's explanation came after a follower prompted him to respond to comments Cassper made about their feud during a radio interview.

AKA said that at the moment he had no problems with anyone.

The Baddest hitmaker said he considered himself blessed and Cassper blessed as well. He encouraged people to "grow the fu*k up" and get over it.

Yo man. My life too blessed. His life too blessed. Let's cut the bullshit and move on. Right now i got NO PROBLEMS WITH NOBODY. Period. Let's grow the fuck up and bring everybody together once and for all. https://t.co/6TWUQVf7Vd

In the video that has surfaced on social media from an interview Cassper did last month, the Tito Mboweni rapper clarified why he doesn't think he'll ever be friends with AKA.

Cassper explained that it was a matter of two kings in one kraal and it just wouldn't work.

"It will never ever work, you know what I'm saying. There can never be two kings. I don't think he'll ever want to get along with me if he's not number one. I just think its cool that we both just exist in the same space and each doing their own thing. I just want to concentrate on the numbers," Cassper said.

🚨🔥INTERVIEW 🔥🚨@CassperNyovest breaks down why him and @akaworldwide can never be friends #SAHipHopMedia 🇿🇦 pic.twitter.com/RZPleI3cbE

Both AKA and Cassper are doing amazing things for South African hip hop. They both have legions of fans who always show up to defend them on the social media streets.

Despite the fact that both rappers have decided to distance themselves from "their" beef, their fans will always be ready to beef on their behalf. All you need is to check the replies and sub-tweets whenever the two rapper post something.

But just in case, AKA's first tweet was too soft, he said one more time for the people at the back. The rapper ain't got beef with nobody, full stop.

I said ... I GOT NO PROBLEMS WITH NOBODY. FULL fucking stop.

16-year-old is signed by Avicii
TshisaLIVE
4 years ago

A whole lot of ass!
TshisaLIVE
4 years ago

Every possible question you have about Musa Mseleku wanting a fifth wife, we have the answers!
TshisaLIVE
4 years ago