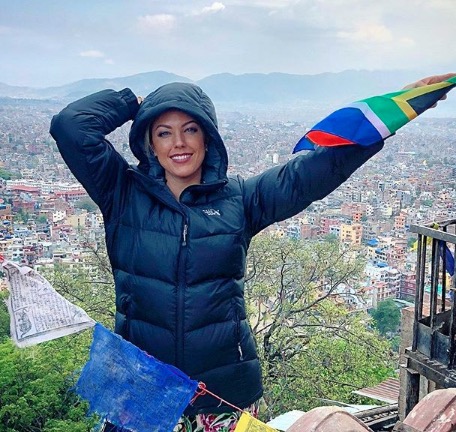 Nicole Capper is in a stable condition.
Image: Via Instagram

Mrs South Africa, Nicole Capper, is in a stable condition after she was airlifted to Kathmandu hospital in Nepal, after she suffered from altitude sickness during a Mount Everest expedition.

Nicole left the country on April 2 as part of an expedition to raise funds for Rare Diseases South Africa.

It is a cause that is close to her heart as she's a mother to a little girl named Tatum, who suffers from cystic fibrosis.

Mrs SA pageant director Joani Johnson told TshisaLIVE that the team in Nepal notified them this morning that Nicole had fallen ill.

"We were notified this morning that Nicole was not feeling well after they reached the Everest base camp yesterday and that she was airlifted to hospital. We have been informed that she is in a stable condition and will have updates as more information becomes available," Joani said.

At the start of the expedition Nicole said on social media that she would be climbing for all those suffering from a rare disease.

EVEREST BASE CAMP We DID IT!!!!!! As a team. Yesterday we completed the trek to Everest Base Camp. 5364m. It was a dream come true, and I stood there with a team of trekking warriors beside me, and a team of #RareWarriors in my heart. Thank you for being part of this journey. And for being part of my team. You all make me brave. Thank you to each and every kind soul who donated towards making @rarediseasessa patients’ lives better. You are phenomenal ❤️🇿🇦🏔 Thank you to my generous sponsors for getting me to #RareHeights: @mandy.peacock @brayfoil #BodyRevivalInstitute . . . #everestbasecamptrek #everestbasecamp We made it to base camp on the day of #winniemandela’s memorial, and so we remembered the mother of our nation.

She has been posting regular updates on her social media about her adventure.

5115m The oxygen levels here are 50% of what they are back home. HALF. And yet we have never felt more ALIVE. We hiked a 200m nearby peak to acclimatize today. I was taught some climbing (especially descent) technique by an Indian summiteer. We got a birds eye view of #everestbasecamp and #KalaPather. And now we rest ahead of a long trek tomorrow to base camp (5380m). This will be the first of three big challenges that lie ahead. The second will be climbing Kala Pather (5550m) on Sunday. And the third will be crossing the precarious Chola pass (5420m) to reach Gokyo Peak thereafter. What an adventure. LINK IN BIO #LiveTheMoment #RareHeights @rarediseases @tammytaylornailssouthafrica @mrs_south_africa

Skolopad has hopes of getting gigs on Zodwa's turf.
TshisaLIVE
4 years ago

Fikile Shabalala accused Mzansi Magic of using her concept for a show, without consent.
TshisaLIVE
4 years ago

Yaasss! Joyous Celebration concert is coming to a cinema near you

Joyous Celebration music with popcorn and a slush? We're here for it!
TshisaLIVE
4 years ago