Gone too soon stings a lil more | Will you learn from their lives?

Akhumzi, Thobani and Siyasanga were still young, but they lived. What will be said about you? 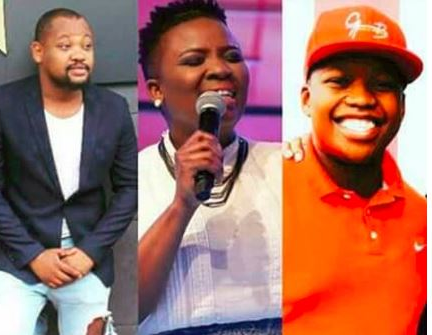 The entertainment industry and Mzansi has been robbed of Thobani, Siyasanga, Akhumzi (pictured here) and two other people in a fatal car accident.

One day you’ll wake up and it will be over. But for some reason, most young people never register “one day” as a day that’s coming any time soon.

We endure a pain that, surprisingly,  feels new every time we have to bury a person we love. Then most of the time we get lost in finding deep quotes to post on social media and go back to our lives.

Joyous Celebration founder Lindelani Mkhize has confirmed to TshisaLIVE that three well-known personalities were killed in the car accident that ...
TshisaLIVE
3 years ago

We move on, but often take nothing from that ordeal, not even a reminder to live.

One mystery of life is that death, although it is the one sure thing in life, always leaves us shook. Maybe it’s too soon to say things like people should learn that we ought to live our lives knowing that it can happen at any time.

If it is, forgive me, because then this piece may upset you.

It’s only been a few days since the tragic death of former YoTV presenter and talented Akhumzi and his friends, the talented singer Siyasanga and actor Thobani died along side two others in a tragic car accident.

Family members of singer Siyasanga Kobese and actor Thobani Mseleni have confirmed to TshisaLIVE the two died in the car crash that claimed the lives ...
TshisaLIVE
3 years ago

In addition to the wave of pain that has settled over Mzansi, there has been a lot of reminiscing and reflection taking place. I, in particular, have been in awe of all the things that have said about these young people and now honour their lives so much after reading about their "essence" from their close ones.

As a 90s kid, I feel like I grew up with Akhumzi. We spent our afternoons together on YoTV. Funny, because as it turns out, he was a huge fan of Joyous Celebration and I was too, which is where I met Siyasanga through her rendition of Noya Na?.

And Thobani, well, I met Thobani at our offices when Inxeba was live streaming the Oscars to find out if they would be shortlisted. They didn’t make the cut and I had a two minute chat with Thobani, who told me shortly in between laughs about his life post being part of the controversial film. It wasn’t an interview, just a chat over finger foods before I rushed back to my desk.

However, like most of you, I still didn’t really know these people, but from the words their friends have shared about them, I have learnt that their short lives were not perfect. Instead they were well lived.

A lesson, I think we should grab on to with both hands.

Thobani Mseleni's last weeks: Things weren't going well but he didn't give up

"He was so excited. He told me he would give me all the details later, but that day never came,"
TshisaLIVE
3 years ago

Writing ‘RIP’ always hurts but writing ‘gone too soon' has an extra sting.

From personal experience and recent observations, I believe that this is often because of the potential to do more. The incomplete conversations and the regret of thinking we still had more time with them.

Whoever created YOLO had the right idea. That was just before we took it and associated it with making reckless decisions and being irresponsible. In an age of being woke, we get lost in so much deep bullsh*t that the basics get blurred.

Maybe the unfortunate death of these young people is meant to be a wake-up call for us.

Say what you need to say to people around you. Risks never taken only become regrets. Live your best life, every day. Never stop trying to fix or improve your life. And find your purpose. Then SLAY the hell out of that sh*t.

"According to us on earth, death is the final destination"
TshisaLIVE
3 years ago

When all is said and done...

"And now these three remain: faith, hope and love. But the greatest of these is love" – 1 Corinthians 13: 13

Life is measured in love and when you are gone, your loved ones may remember your diligence, your work ethic and may even speak about your qualifications or even your street cred, but it will be your time, the hope you instilled in people around you and the love you’ve shared that will be etched in their hearts.

Even though the pain remains the same, through the accounts of their loved ones, we know that Akhumzi, Thobani and Siyasanga lived. They were here.

May they now rest in perfect peace.

Akhumzi was easy to love and Mzansi is devastated by his death.
TshisaLIVE
3 years ago

TV presenter and producer Akhumzi Jezile killed in an accident on Saturday morning.
TshisaLIVE
3 years ago