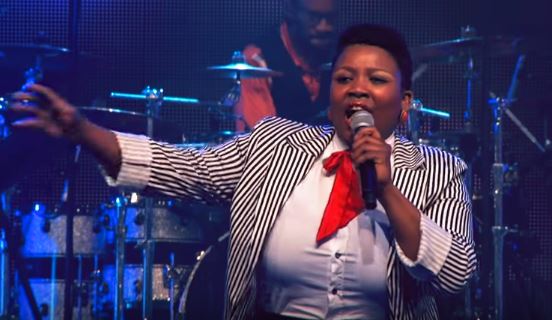 Siyasanga Kobese always sang her heart out on stage.
Image: Via YouTube

The news of the triple celebrity deaths of Akhumzi Jezile, Thobani Mseleni, Siyasanga Kobese and two others is still the only thing on the minds of many in Mzansi. But Joyous Celebration loyalists have resorted to going back to their archives to re-live the amazing presence of Siyasanga.

Before Siya made a name for herself as an actress, she was known to many as the woman from Joyous celebration that took an old hymn and made it her own.

The song Noya Na? is a traditional Christian song that has been sung a million different ways, but when Siyasanga took the lead vocals, it became a gospel hit.

The lyrics to the song which tells the journey of going home to heaven has become a reminder of the energetic performer Siyasanga became known for.

Siyasanga's fan base grew with her and by the time she took to Joyous Celebration 17 to perform her heart out with the song Hay' Inyweba, she had legions of adoring fans.

She lived to praise God with her talents and she enjoyed it.

TV presenter and producer Akhumzi Jezile killed in an accident on Saturday morning.
TshisaLIVE
4 years ago

Joyous Celebration founder Lindelani Mkhize has confirmed to TshisaLIVE that three well-known personalities were killed in the car accident that ...
TshisaLIVE
4 years ago

"According to us on earth, death is the final destination"
TshisaLIVE
4 years ago

Animal lovers can look forward to a new wildlife series.
TshisaLIVE
4 years ago