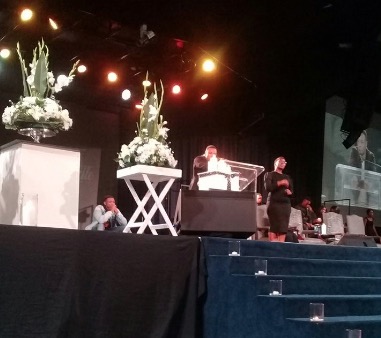 Akhumzi Jezile's friends and family are paying tribute to him at a memorial service.
Image: Via Twitter

Tears flowed at the Rhema Bible Church in Randburg on Thursday evening when Akhumzi Jezile's best friend, co-star and "brother" Pallance Dladla took to the podium during a memorial service in honour of the TV personality.

Pallance and Akhumzi's friendship started years ago when they both auditioned for talent search show Class Act.  They also acted together on both seasons of Tempy Pushas and away from the small screen they were as thick as thieves.

Even though they weren't related by blood, in Pallance's eyes Akhumzi was the brother he always wanted.

When Pallance took to the stage it was all too much for Akhumzi's mom whose weeping echoed through the church.

Fighting back tears himself, Pallance said he had lost a brother.

Pallance reflected on how when they first met, they didn't initially hit it off.

"We first met at an audition and we didn't start off on a good note because he kept forgetting how to pronounce my name properly but ever since then he's been making fun of me. I've been making fun of him, and I don't know whose going to do that now."

Pallance said the only birthday present Akhumzi ever bought him was a Britney Spears album, but gave him a far greater gift.

"He gave me the brother I always wanted."

Pallance says Akhumzi said when he's in heaven he's not to be bothered for VIP tags.😂#AkhumziJezileMemorial

You can hear people break down from different parts of the room as Pallance speaks. 😭#AkhumziJezileMemorial pic.twitter.com/DKeKTqGWxU

Akhumzi's other close friend Nolwazi Shange also brought mourners to tears as she gave tribute to him.

WATCH: Nolwazi Shange had the whole room in tears with her emotional tribute #AkhumziJezileMemorial pic.twitter.com/M1HNih7oea

Those close to Akhumzi Jezile have gathered at Rhema Bible Church to pay tribute to him.
TshisaLIVE
4 years ago