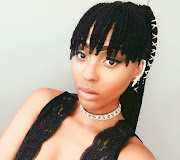 A week after Nadia Nakai left the stage on fire at the Castle Lite Unlocks concert; her timeline is still flooded with congratulatory messages from fans and industry mates alike.

Nadia said that fan love and her mentor, Cassper Nyovest's validation meant the world to her.

Speaking to TshisaLIVE, the rapper said rocking the show was a great feeling for her but it was her mentor's validation before and after the show that sealed her victory.

"I was talking about how Cassper brought me out onto the stage last year when he opened for Travis Scott and it also felt amazing for me to call him out onto my set. It was almost like when a proud father gets to watch their child graduating, that's how I felt when he told me how well I did. It meant a lot to me, it was like I was graduating and his constant affirmation for me is like getting that nod of you did well from your dad and I value it so much."

She added that it was a blessing to have a person like Cassper and the team support her.

"If there was ever a time I doubted myself, Cassper and Family Tree has come through for me, you know. Just always telling me how proud he is of my work and the effort I put into it."

The rapper spoke about how important it was for her to make her statement as one of the acts sharing the stage with Chance The Rapper on the day.

However, she also made it clear that SA and the rap game in particular, had reached a point where they aren't put under pressure by international acts.

"I had pressure but not the kind brought by having to share a stage with an international rapper. Rather it was more excitement and the normal pressure every artist has before they put on a great show. I don’t feel like the fact that Chance would be there was the reason behind the pressure, I had. We are past that. I just knew that I had to give a stellar show, and the organisers made sure I had the support I needed to have a great show."

Her fans can't get enough of the rapper, who prioritises putting on a great show. She told TshisaLIVE that she wanted people to experience her fully when she was on stage.

Nadia said making fans pay for mediocrity was not something she was willing to do.

"It felt amazing to be on that stage with that kind of production behind you and I knew that I couldn’t take that opportunity for granted. I mean, I rehearsed for about two months and sometimes from my own pocket because I wanted it to match the dreams I’ve had for it."

"There’s no way to go from here but up, not only for performances but also my music. I will not keep people waiting for so long to give a mediocre album."