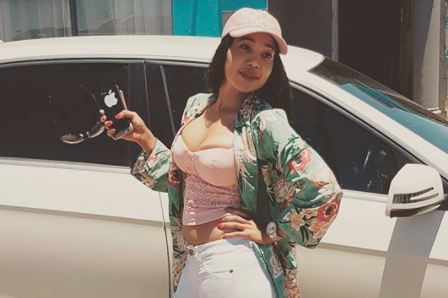 Mshoza opened a case of assault against her estranged husband last week.
Image: Via Mshoza's Instagram

Police have confirmed to TshisaLIVE that Mshoza's husband, Thuthukani Mvula was arrested on charges of assault and has been released on R5,000 bail. This after, Mshoza opened a case of assault, intimidation and pointing a firearm at the Phuthaditjhaba police station in QwaQwa, Free State last week.

Police spokesperson Sergeant Mmako Mophiring said on Tuesday that Thuthukani had been cooperating with police.

"He handed himself over at the Phuthaditjhaba police station on Monday. He appeared in court shortly after that. He was granted bail of R5,000 and was told to reappear on May 28. In the meantime, we are continuing with investigations."

Thuthukani's bail conditions prevent him from being in contact with Mshoza.

"He cannot communicate with her or arrange meetings with her. He understands that."

Mshoza has apparently been in hiding and under 24-hour protection amidst fears for her life, the singer's management confirmed on Monday.

Last week Daily Sun reported that Mshoza fled the home she shared with Thuthukani Mvula amidst assault and cheating allegations.

Attempts by TshisaLIVE to get comment from Thuthukani proved unsuccessful. However, the businessman denied the assault allegations and claimed, in an interview with Sowetan, that he had never laid a hand on a woman.

Mmako said that Mshoza had not asked for police protection but her manager Thanduxolo Jindela told TshisaLIVE this week that she was currently in "a safe place" under constant security and apparently getting medical attention.

"Mshoza has been going through a lot in the last few days and is still very scared. She fears for her life and has been trying to make sense of everything. I think it is all hitting her now, the impact of what happened, and so the best place for her right now is under 24-hour protection."