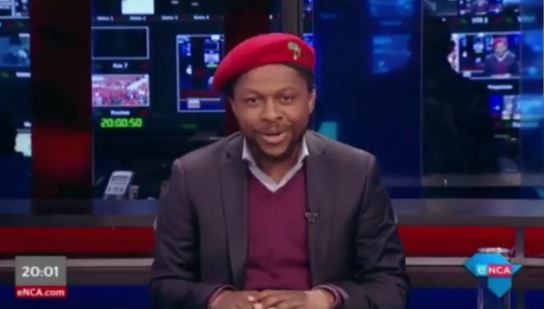 Mbuyiseni Ndlozi was a host on eNCA on Monday.
Image: Via eNCA

EFF spokesperson Mbuyiseni Ndlozi had people glued to their TV screens on Monday when he was a guest host on eNCA's As It Happened.

The politician, whose party has often slammed the broadcaster, put on a suit and his brightest smile to discuss some of the biggest news stories of the day.

He not only read the news, but also had a engaging debate with Peter Bruce on land expropriation and had a live Q&A.

Other politicians that will take over the show this week include the Democratic Alliance’s Natasha Mazzone, the United Democratic Movement’s Bantu Holomisa, African National Congress’ Pule Mabe and the Inkatha Freedom Party’s Lisa van Merwe.

But, yoh, The People's Bae did the most, and had viewers rushing for the land with his comments.

Here are just four comments that gave the internet life:

"Today I'm your host in this white monopoly capitalism platform"

Ndlozi came straight out the gate to label the broadcaster a "white monopoly capitalism platform" and had the Twitter streets howling.

Watching @MbuyiseniNdlozi on #AsItHappens . I love how he says 'on this white monopoly capital platform'. pic.twitter.com/ctmGJU9eC5

"Love without justice is evil"

This was the moment The People's Bae became The People's Poet 2.0. Ndlozi ended a touching sermon on abuse by telling women to always remember "love without justice is evil". We died.

#AsItHappens Love without justice is evil 🔥🔥🔥

"Where is your source?"

In a conversation with Peter Bruce about his column in which he claimed that only a tiny minority of black people want to farm, Ndlozi hit Bruce with a young "where is your source?" He later returned with a strong clapback, declaring ""I could disagree, but I should have the correct sources."

[EARLIER] #AsItHappens: Dr @MbuyiseniNdlozi in conversation with Peter Bruce @Bruceps. He asks him about an opinion piece that Bruce wrote stating that a tiny minority of black people want to farm. Asks him about the source he used to arrive to that conclusion. Courtesy #DStv403 pic.twitter.com/pwDZOTxPcP

#PeterBruce falling over himself as @MbuyiseniNdlozi takes him to cleaners with a simple request to cite his sources for the opinions he has written. #AsItHappens

#Ndlozi is doin dis #AsItHappens with his #eff hat on for real!? pic.twitter.com/o38jn9NBQF

#AsItHappens
Score update
Peter 0 - Ndlozi 10
And i have a source to prove how I arrived at this score.

#AsItHappens@MbuyiseniNdlozi please keep pressing Peter on what is his source on "only a minority of black wants to be farmers" pic.twitter.com/2InqhxWPqm

Ndlozi delivered a smackdown when he dropped in a line while Bruce was looking at his notes. With a smile on his face, he said: ""even when you're reading there, you not reading them properly".

"even when you're reading there, you not reading them properly" - Dr Ndlozi'last words to Peter Bruce 👌🏿#AsItHappens 🔴 pic.twitter.com/15GbV3kks3

“Even when you are reading them, you are not reading them correctly”
Why are you like this @MbuyiseniNdlozi #AsItHappens pic.twitter.com/JXGX74HGdY

#AsItHappens I’d hate to be the next anchor after Dr Ndlozi yyeeeerrrr! The bar has been set quite high. pic.twitter.com/mYRR0PgUzH

DJ Sbu thinks it's about damn time the SA education system stops imitating the rest of the world and starts creating a syllabus suited to Mzansi. And ...
TshisaLIVE
3 years ago

Thembi said God has granted her a precious gift.
TshisaLIVE
3 years ago