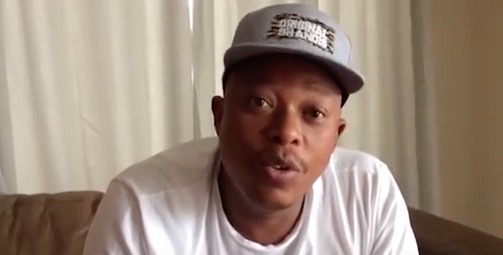 Mampintsha said it was clear Babes was confused about the allegations.
Image: TimesLIVE YouTube

Record label owner and musician Mampintsha has called into question the allegations of abuse made against him by Metro FM DJ Masechaba Ndlovu during a live interview on radio on Friday, insisting that she was putting words into Babes Wodumo's mouth.

Babes was in studio with Masechaba and Mo Flava when Masechaba confronted her about allegedly being abused at the hands of Mampintsha.

Musician and record label owner Mampintsha has responded to allegations of abuse levelled against him during an interview on live radio on Metro FM. Radio host Masechaba Ndlovu confronted Wodumo about claims the Wololo singer had been a victim of abuse at the hands of Mampintsha, her ex-fiancé. Subscribe to TimesLIVE here: https://www.youtube.com/user/TimesLive

Masechaba claimed to know of friends who allegedly took Babes in after Mampintsha apparently punched her and broke her leg. Babes wept while the accusations were being made. Earlier she admitted they had parted ways and Mampintsha had access to her social media accounts and posted an image on her Instagram to make it appear as if they were still together.

Even though Mampintsha on Saturday morning admitted that he does not "plead absolute innocence in the claims made in the interview," a statement he made on his public Facebook page, in a new video obtained by TshisaLIVE, Mampintsha is angry that Babes did not defend him when he claims "people were putting words in her mouth."

“Social media and enemies are using these platforms to meet their needs and to get to me, and they insult me without getting my side of the story. Babes didn’t say anything and she is also confused when you watch the video.”