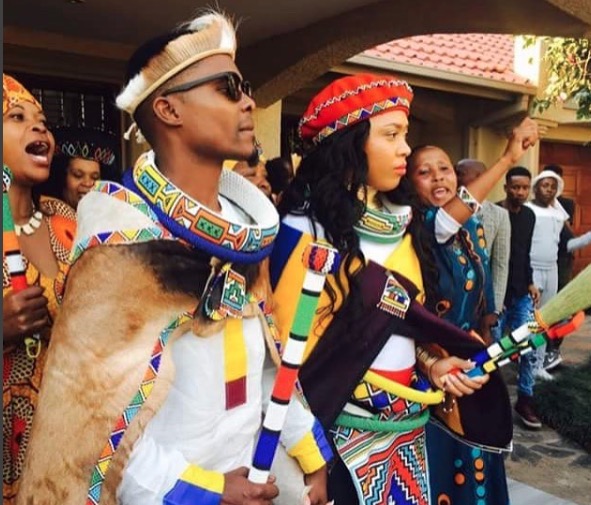 Even though it was one of the most heartbreaking things she's had to endure, Simz Ngema managed to smile through the pain as she celebrated her first wedding anniversary without Dumi Masilela.

Yesterday (May 20) marked one year since Simz and Dumi took their romance to the altar.

Even though Dumi was not here to celebrate the special day with Simz, she was surrounded by her loved ones who managed to make her smile.

Simz also chose to focus on the epic love she and Dumi shared.

"I thank God for giving me a chance to experience love in its purest form. You’d swear I was something magical from the way you looked at me. I love you forever and always. Happy 1st year wedding anniversary."

Simz also visited Dumi's grave with her friends, who were there to cheer her up.

"Thank you for helping me carry my burden. The stupid jokes and laughter made today so much lighter and I know it’s what Dumi would have wanted...to see me smile. I am blessed."

Dumi was shot and killed during a botched hijacking in Tembisa in August last year.

Thank you for helping me carry my burden. The stupid jokes and laughter made today so much lighter and I know it’s what Dumi would have wanted...to see me smile. I am blessed. @roberta_gumede @tia_royalty @kels__o @mal380 @shandu16 @punkacious ❤️

In the video obtained by TshisaLIVE, Mampintsha said it was clear Babes is confused by the allegations.
TshisaLIVE
2 years ago

Mshoza is the latest celeb to comment on the alleged abuse claims.
TshisaLIVE
2 years ago

Baby Remo took his first steps and that means a party is in order.
TshisaLIVE
2 years ago
Next Article