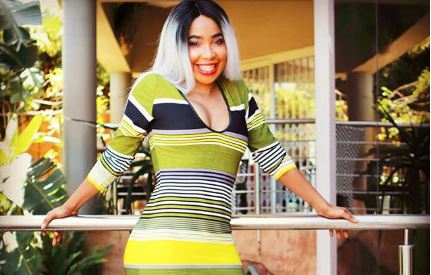 Mshoza says she was tired of staying in a loveless relationship, so she looked for happiness elsewhere.
Image: Via Instagram

Mshoza has admitted that she has indeed moved on and is in love with 37-year-old police detective, Tlhabe Mbhele but insists that she's not cheating.

The Kortes hitmaker told Drum magazine that trouble in her marriage had been going on for months and that she met Tlhabe in January this year.

Mshoza said as far as she was concerned, Tlhabe opened her eyes to what love is.

Mshoza explained that she met the detective after she was allegedly arrested for speeding and the pair became friends after the incident. She said he became her support system and they began dating in March.

"He's respectful, forever smiling and I felt safe and protected with him..."

Mshoza, who now wants to terminate her traditional marriage, said she didn't care what other people thought of her decision to move on.

"If a relationship isn't working out I will move on to find my happiness somewhere else and I won't apologise for living my life."

Mshoza and Thuthukani traditionally tied the knot in 2017 but the facade of a happy marriage came crumbling down recently as the former lovebirds' split turned ugly.

Mshoza has been "in hiding" amidst claims of abuse at the hands of Thuthukani.  During an interview with Metro FM's DJ Fresh last Monday Mshoza said she planned to leave her marriage months ago and that she feared for her life.

"I saw this coming. I was planning to escape. He was quicker than me. I am very scared, I even told my sisters two weeks ago that I couldn't leave him because I was very scared.

Mshoza's manager Thanduxolo Jindela told TshisaLIVE that Mshoza has been having a hard time but said that the law should be allowed to take it course.

Police also confirmed to TshisaLIVE that Mshoza's husband, Thuthukani was arrested on charges of assault and has been released on R5,000 bail.

"He handed himself over at the Phuthaditjhaba police station on Monday. He appeared in court shortly after that. He was granted bail of R5,000 and was told to reappear on May 28. In the meantime, we are continuing with investigations," Police spokesperson Sergeant Mmako Mophiring.

Thuthukani's bail conditions prevent him from being in contact with Mshoza.

In the video obtained by TshisaLIVE, Mampintsha said it was clear Babes is confused by the allegations.
TshisaLIVE
4 years ago

Baby Remo took his first steps and that means a party is in order.
TshisaLIVE
4 years ago

WATCH | What 'African parents' hear in Yanny or Laurel debate

What do you hear? Yanny? Or Laurel?
TshisaLIVE
4 years ago