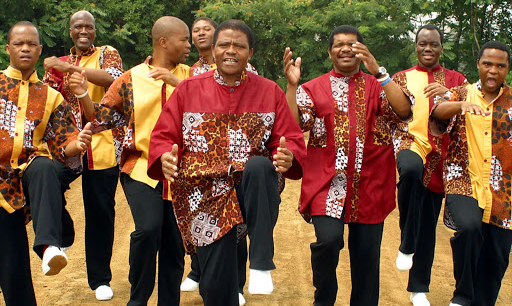 Ladysmith Black Mambazo say that the secret to international success is bringing something different to the table.
Image: File Photo

It's been almost 60 years since Ladysmith Black Mambazo burst onto the world stage and the local group keep slaying, recently scooping their 5th Grammy award.

There must be something in the water at the group's headquarters that keeps them slaying but the group's Sibongiseni Shabalala told TshisaLIVE that the secret to their success is not as complicated as the KFC recipe or the ingredients of Coke.

"We work hard and we are respectful. We are ourselves and we don't try and copy anyone else. That is the secret. It was something my father Joseph taught us all when we joined and a formula we haven't been allowed to forget."

That has helped them win over fans across the world and Sibongiseni had another gem for those who desperately want to crack the overseas market.

"Black Coffee is doing well, and so is Trevor. So there are South Africans having success overseas, we are not the only ones. But the biggest thing, I have found, is being yourself. People want a unique experience; they want something different. Too many South African musicians are trying to be like other artists overseas. They need to be more unique."

The group have just returned from shows overseas to do a South African tour and celebrate their Grammy win. Sibongiseni said this win was especially sweet because it was the first since their founder Joseph Shabalala retired and handed over the reins to his children.

"It was like going away from home and coming back with presents for your dad. We were so proud of what we accomplished and he was so happy with us winning the award."

Although Joseph always had a plan in place for when he decided to retire, there were still anxious moments in the group in the weeks following his exit.

"We knew there was a plan but you still have those voices of doubt inside you asking if you are really going to be able to do it like you did before, if you are going to still be as organised and loved by people. It was a worry but we dealt with it."

The group will be performing shows at the State Theatre from June 1-3, and said they would use the opportunity to celebrate Mandela's centenary year.

"Tata Madiba has a very special place in our hearts. His courage and determination was an inspiration to everyone. We wrote a song for him called Long Walk to Freedom when he went to Oslo. We will perform that in tribute and we are also planning a special event at the end of the year to celebrate him.'"

Masoja gets some stuff off his chest.
TshisaLIVE
3 years ago

Siyabonga Shibe has played some character that have left him shaken as a man.
TshisaLIVE
3 years ago