The singer's peach jumpsuit was ripped to shreds on Twitter. 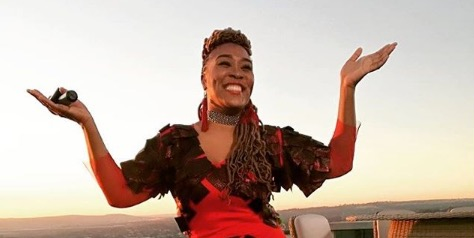 Several designers have apparently come forward to help Lady Zamar for the Samas this weekend.
Image: Via Instagram

Topping the Twitter trends list for over 24 hours after followers dragged the outfit she wore to the Miss SA pageant on Sunday night has apparently left a bad taste in Lady Zamar's mouth.

Lady Zamar gave fans a powerful performance at the glitzy pageant, but her peach jumpsuit with silver detail and a puffy bow-like addition on one sleeve failed to impress.

The songstress quickly became the butt of all jokes as followers voiced their opinions about the outfit. They called for designer, PineNaple Designs to be sacked with immediate effect.

Lady Zamar has become a major talking point on Twitter for her fashion sense.
TshisaLIVE
4 years ago

A close friend of Lady Zamar's told TshisaLIVE on Tuesday that she was not happy about what was said on Twitter.

"She is not happy at all and is stressed about trending for all the wrong reasons."

As all roads lead to Sun City this Saturday for the annual South African Music Awards, Lady Zamar is also apparently worried about a repeat of last week's events.

Apparently Zamar needs about three dresses for the event as she is also performing and is hoping to slay on the red carpet.

Lady Zamar has also remained silent about the fiasco, only sharing a screengrab about topping the Twitter trends list and another about "happiest girls being the prettiest".

The game is called: Who's fooling who?
TshisaLIVE
4 years ago

Twitter makes Proverb the 'new' leader of the Boyfriend Olympics

Twitter appoints Proverb as the new CEO of boyfriend goals...
TshisaLIVE
4 years ago

Hulisani on Psyfo split: I heard 'just give him a chance’ more times than I could bear

Hulisani said she didn’t speak to some family members for several months because they couldn’t accept the break-up.
TshisaLIVE
3 years ago

With the excitement, I actually forgot I won so much money - Miss SA Tamaryn Green

Miss SA Tamaryn Green is looking forward to the exciting journey ahead.
TshisaLIVE
4 years ago