Last night Da L.E.S opened up about his life without filter, shocking fans that thought they knew him 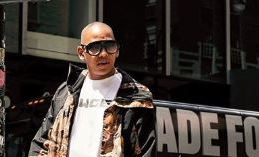 Rapper Da L.E.S opened up about his past and how he's made it work for who he is now.
Image: Via Instagram

Most of us make assumptions about who we think rappers are based on their songs, social media and mainstream media but fans of Da L.E.S were left shocked as they watched his #BehindTheStory interview.

For the first time, most tweeps realised that they had "disliked" the rapper based on his "persona" as opposed to who he is.

Da L.E.S sat down with Pearl Thusi and held nothing back about the story of his come up and the trials, and tribulations he's been through.

Many tweeps said they realised while watching the interview that they disliked the rapper for "no particular" reason.

I actually used to hate DA Les he annoyed me. Not anymore. 😂#BehindTheStory

Most tweeps learnt these four surprising things about Da L.E.S.

M enjoying da les interview, he is such a humble soul..#BehindTheStory

2. He didn't invent a struggle story to sell his music.

I love how Da Les never created a struggle story for relevance. He appreciated his hefty privilege and never backed down. 🙌🙌 Respect. #BehindTheStory

3. He believes competition makes the music grow and he'd love to work with Cassper Nyovest.

#BehindTheStory So DaLes says he'd love to do a collabo with Cassper. That track would sound dope.

Da LES's last words on #BehindTheStory "Treat ladies w respect & love like you'd do to your sisters, your mother & your child" man I felt ✊👌

'You can love a person & still move on,' says Vusi Nova

"You can't, just because you love a person, sit there and stand for all their sh*t basically," Vusi Nova said.
TshisaLIVE
3 years ago