Rapper Mx Blouse's preferred pronoun isn't he or she, it's they...

Mx Blouse is an artist who is beyond gender and beyond genre. They introduce us (and the world) to a fresh take on re-defining your identity and living your best life. 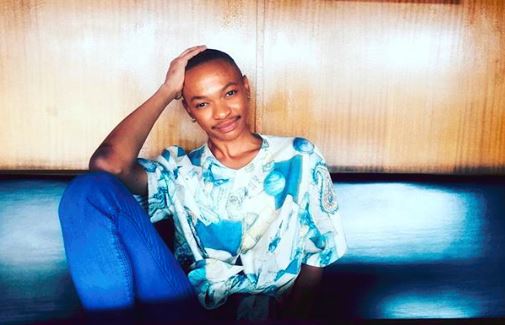 Mx Blouse is a South African rapper on a whole new wave.
Image: Via Instagram

Once in a blue moon a star is born. A star that refuses to compromise its shine in any way, shape or form. Mzansi has seen an increase in stars who insist on proclaiming their unique identities unapologetically - one of them is Mx Blouse.

If you haven't heard about this rapper, be assured that it's only a matter of time until you do... Mx's bio describes them as a "beyond gender, beyond genre" artist, something you just don't find.

"Of course my pronouns are 'them' and 'they' but people still call me 'he', but I'm just like whatever, it's okay I guess. For me, it's more about myself and knowing who I am. However someone else outside of me chooses to define me, that is their porridge to eat."

When Mx (pronounced 'Mix') Blouse, steps into the Tiso Blackstar building for an interview with TshisaLIVE they immediately have the whole room turning heads. It isn't because they are flamboyant in any way, in fact they are dressed in all black with a simple side back and interesting earrings.

The former journalist, born Sandiso Ngubane, greets some familiar faces around the office before we decide to chill outside for our interview so they can smoke while we chat.

"Please don't feel offended if I mistakenly refer to you as 'he' although I will try my best to avoid pronouns altogether," I say... A lil' disclaimer before we begin the interview.

They politely tell me they understand and go on to take me with them on a ride down  memory lane.

Mx explains that they was born in Melmoth in northern KwaZulu-Natal but had childhood memories that were scattered across different geographical locations, due to constantly moving and a "dysfunctional" family structure.

"My mom and dad were never married, so my mom was a single mother and when I was born, she was just 17. So I spent most of my childhood with my grandparents."

Mx saw their father on occasion, and due to their constant moving, they became somewhat of a nomad.By the time Mx matriculated, they had gone to eight different schools.

"My dad is a deadbeat dad. So even the whole thing of living with my paternal grandmother, I think on her part it was just like taking responsibility for her son. He was living his best life in Durban. But I used to sometimes visit him during school holidays. So my childhood was really just scattered all over the place."

After Matric Mx moved to Joburg. They didn't know exactly what they would do but they knew one for sure, they were different.

Artists always have that "it" factor that sets them apart and Mx has that in bucket loads, but it is their identity as a person that has shoved them into the spotlight for many people.

Particularly because of how "conservative" (for lack of a better word) South Africa is. Mx's identity as a gender non-conformist makes them stand out.

"So I identify as gender non-conforming and it was important for that to be reflected in the video (music video for their latest track Is'phukuphuku). Obvs, the video is a bit more exaggerated because it's costume, but on a daily basis I wear clothing from both the men's and women's section... if I like it I'll wear it."

So what is a gender non-conformist?

The short answer is: a person who regardless of their sex (male or female) does not conform to the social views/standards of a person's gender (masculine or feminine).

According to Live About, a gender non-conforming person may choose to identify as neither clearly male, nor clearly female, but rather as a gender-free individual. Some gender non-conformists are transgender, gay, lesbian or bisexual. Others do not identify with any of these categories.

"I think of gender as not something you are born with but something you are socialised into. So when they say men don't cry it's not like men don't have tear ducts, it's a learnt behaviour. Growing up, I never knew if I identified or fitted in with girls or boys, I was always somewhere in the middle but I didn't have the correct vocabulary for it."

Mx explains that they are a male that is attracted to men (not just gay men, but all kinds of men) and identifies as gender non-conformist. They concluded that they are neither girl nor boy.

It's an identity they admit many around them still don't understand.

"There is a lot of confusion, gay has nothing to do with it. Gay is about your sexuality and sex... because being gender non-conforming doesn't mean I'm not a male person. I'm still male because I have a penis. So I'm a non-conforming gender queer person."

Mx speaks about being "over constantly having to justify" themselves and their choices to people. They laugh as they describe a conversation between them and an aunt from KZN.

"There's always that aunt in KZN... like the one who messaged me and said; 'I just saw you on television, was that lipstick that you were wearing?' And I was like; 'no it wasn't lipstick, it was lipgloss... okay!'" Mx says, before bursting out in laughter.

In Mx's music video for their single Is'phukuphuku, they and their stylist, Peter Georgiades, go gaga and totally avant-garde in expressing themself beyond gender and genre.

From their first offering to 2017's EP Believe in Bloom and 2018's Is'phukphuku a lot of different influences come through vividly in their music.

"I recorded Believe the Bloom which was like my first EP and that was completely hip-hop, then I worked with another producer who's an electronic music producer. We did this song that just reminded me of TKZee so much. I started rapping in vernacular which felt so good and so authentic. It took time for my sound to click but I experiment a lot so my next single might just be kwaito."

Mx says they are trying to carve a niché market for themselves because the time is ripe for such. Even though they are more interested in doing something new, they want to incorporate different worlds into their music, while always having something authentic to home.

"In five years I just want to be touring the world and playing at festivals, I want Mx Blouse to be a household name. I would love to branch out into other art forms, do films and write books. I actually already have a manuscript; it's a fictitious story based on my manic childhood."

LOL! KZN waiter has Twitter thinking 'Jacob Zuma' got a side job in PMB

Veteran musican drops pearls of wisdom on raising kids in the industry.
TshisaLIVE
3 years ago