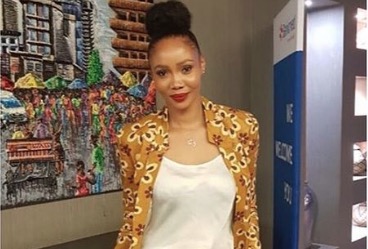 Azania Mosaka plans to put her own stamp on Real Talk.
Image: Via Instagram

Being at the helm of an award-winning show that has become hugely popular with viewers is surely nerve-wracking, but thankfully Azania Mosaka is a woman who never turns down a challenge and plans to take the show to greater heights.

On Wednesday night the SABC announced that Azania will be taking over as host of Real Talk from Monday, June 18. The news came a few weeks after former host Anele Mdoda announced her resignation.

The last time Azania had a TV role was almost a decade ago, but her love for being in front of the camera was reignited when she stepped in for Anele who took a break earlier this year.

Azania told TshisaLIVE that taking over an award-winning show that has been built into the brand that it is today is a huge responsibility,  but exciting all at the same time.

"It's been a long time since I was last on TV. I think maybe ten years and this was completely unexpected. This definitely didn't form part of what I had planned for 2018, and when it came, it made me sit back and think if this fitted in with where I am in my career and if it will advance my dreams. I think I am more mature and I am definitely ready for this."

Taking over a show that already has a huge fan following can't be easy, but Azania plans to win viewers over with her own style.

"I am very passionate about having real conversations with ordinary South Africans who are doing extraordinary things. I feel like this is a great platform to tell stories that don't often come to the fore."

The show also features some of Mzansi's most famous faces, and being in the spotlight herself, Azania knows the pressure of sharing your life story with the entire nation.

Azania said that she totally understands that pressure and will continue having Mzansi's favourites take the hot seat, but plans to spice things up to tell "fuller and more layered stories".

Yaasss guuurl, we're here for that!

Amanda du Pont is clearly winning at this life thing... and if it was a race she'd probably get there first in her McLaren!
TshisaLIVE
4 years ago

Zinhle supports AKA & 3 other mega moments from the#TouchMyBlood party

There were a few surprises at the Mega's listening session.
TshisaLIVE
4 years ago