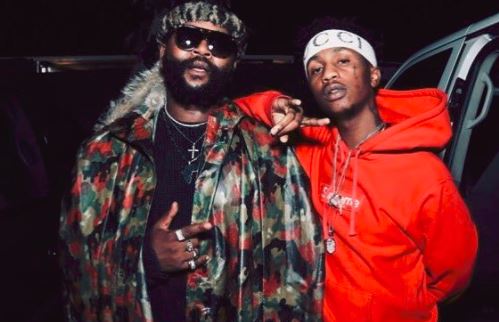 Sjava and Emtee have been #BestieGoals for days.
Image: Via Instagram/Emtee

BET-winning muso Sjava says that people are not walking in Emtee's shoes and should give the young rapper a break instead of always targeting him.

In an interview with TshisaLIVE prior to the performance where Emtee fell on stage and was accused of "wasting his career", Sjava said there was always a target on Emtee's back.

"People say that he (Emtee) is high all the time and that he must watch himself but they don't know him. They don't know how hard he works. They need to give him a break."

There have been several calls from fans for Sjava to "rescue" his friend, but he has rubbished this suggestion.

"We speak often and I am not worried about him. He works hard. We all have late nights and constant gigs and a lot of things that make us tired, and sometimes it can seem that we are not fine. But we are all fine."

The pair have always been close, even apparently wearing each others clothes growing up.

Sjava, who recently hinted at his next album being his last for a while, said he was constantly making music, including with Emtee, and wanted to go back to a time where the music, and not fame, was all that mattered.

"I always said that I only make music for myself, not for the fame or hype. I am not going to make music after I drop my next project. I don't know what I am going to do but it won't be in music."

For all that Naomi Campbell wanted to honour Nelson Mandela when she visited Johannesburg this week, she failed to match his respect for press ...
TshisaLIVE
3 years ago

Masechaba on split from hubby: 'Sometimes, the best thing to do is the hardest'

"Often, people keep up pretenses because of the fear to be seen as failures or to lose credibility. We forget that the best gift you can give to the ...
TshisaLIVE
3 years ago