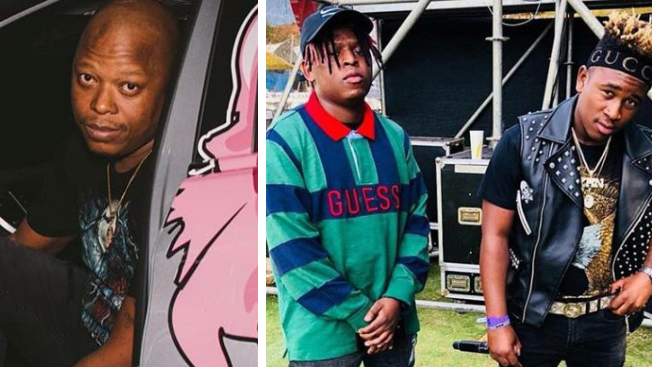 Distruction Boyz claim to have been sitting on the sidelines, while Mampintsha allegedly cashed in on Wololo for over two years, and now plan to take legal action so that they're paid what is allegedly owed to them.

The group, who produced the hit track for Mampintsha and Babes Wodumo, told TshisaLIVE they had reached out to the West Ink boss every time they've seen him score a big deal from the song but after being ignored, had decided to take the battle to court.

"We are getting a lawyer and taking him to court," Zipho 'Goldmax' Mthembu said.

He said that Mampintsha had previously told them that he would pay them their portion of the profits from the deals when he got the money, but never did.

"There has been so much income that Mampintsha didn't give us. It is royalties. It is endorsements. It has been caller tunes, downloads. Even Black Panther (the song was featured in the Marvel film). He said he wasn't getting any money but we spoke to other people and they said they were paid."

Repeated attempts by TshisaLIVE to contact Mampintsha for comment in response to the claims were unsuccessful at the time of publishing this article.

Wololo made a name for @westinkrecords and made Babes Wodumo #MampintshaPayUs

You better start paying what you owe us ! @MampintshaNuz cc @westinkrecords

Although Goldmax wouldn't reveal how much they were owed, their manager Sphamandla Gumede claimed during a YFM interview on Monday that it was an amount of over R15-million, he claimed the group did not get one cent from any of the deals.

"Wololo was the biggest song in the country. It feels like we are being exploited and that he forgot about us. He doesn't want to communicate with us. We haven't even got one cent from him and it's been two years now," Goldmax said.

Mampintsha's looking for characters to play him & Babes Wodumo

Eh? We thought Mampintsha and Babes were history.
TshisaLIVE
4 years ago

What on earth is going on with Mampintsha & Babes Wodumo?

Mampintsha penned the sweetest love letter to Babes on his Instagram but that has just left Mzansi in a pool of confusion.
TshisaLIVE
4 years ago

'We won't drop him' - Mampintsha will still perform at show, says Tira