The Soil's Ntsika is going solo, but he ain't leaving the group

Not even in the after-life fam... 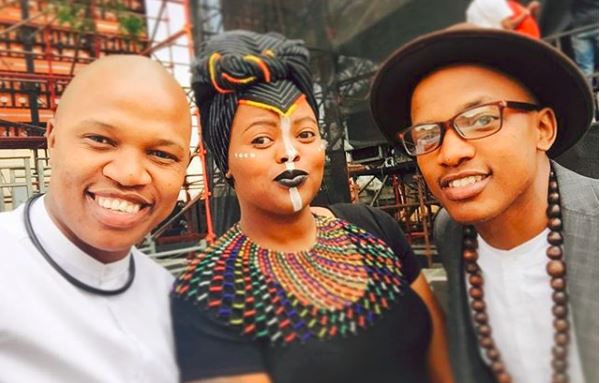 The Soil (consisting of Phindo, Buhle and Ntsika) has a huge following both in Mzansi and in the world for their world-class acapella hit songs.
Image: Via Instagam

Fans of acapella group The Soil almost fell into a collective state of depression when they thought that talk of a solo career from Ntsika Ngxanga meant he was leaving the group, but he's come out to reassure them that he ain't going anywhere.

Ntsika told TshisaLIVE it was because of the support of his group that he was blessed enough to explore all his capabilities, especially his upcoming solo album.

"The Soil continues to be this amazing environment that is conducive for all these ambitions that I have. If it wasn't for The Soil, I don't think I would even have some of the ideas that I have, so instead of being a hinderance, The Soil is a catalyst that propels me to do even more.

Since the days of Joy, we can't deny that we've been inlove with The Soil.
TshisaLIVE
4 years ago

Ntsika said he was grateful that his fellow group mates were giving him a chance to live out his potential.

"Buhle and Master P are so incredible and have made room for all of us to explore our individual brands while still making sure that The Soil stays in tact. I would never leave The Soil, not in this lifetime or in the next one. I will still be with The Soil long after we leave this planet."

He said he hadn't thought about taking the solo route until his ancestors, through his dreams pointed him in that direction.

Ntsika says his song are given to him by God through his ancestors in his dreams.
TshisaLIVE
3 years ago

"I didn't wake up one morning and say, 'I want a solo career'. From last year, June 2017, I began dreaming about me and my grandfather, Tat'umkhulu Mayiza. It was just both of us in the dream, not saying nothing to each other and when I woke up, I would hear a song that was playing in the dream and I would quickly write it."

Ntsika said six months later he had twelve songs that he knew were meant for him and although he can't share at the moment, there are also exciting collaborations in store.

"It will come out in God's time. I already have a song out and I am still in studio. The 12 songs from a sacred place that I have been gifted with are ready but I don't want the process to be rushed by timelines."

Ntsika gave fans a taste of what to expect from his solo offering when he shared a clip from a collab with Vusi Nova. And, the song sounds like FIRE already!

Just listen to this:

The next Mokoena generation is en route.
TshisaLIVE
3 years ago

Actor says he was sad to leave but would welcome a return to the popular soapie.
TshisaLIVE
3 years ago

Sjava says copying other musician's styles is too rife in the industry.
TshisaLIVE
3 years ago