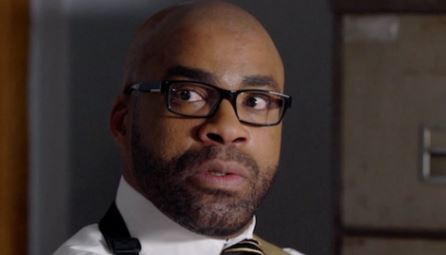 Shona Ferguson plays the role of Jerry on The Queen.
Image: Via Mzansi Magic Twitter

While there's no denying that watching The Queen has been a thrilling experience over the past few weeks, with all the drama surrounding Vee's abduction and Jerry playing the hero, however tweeps felt that they had bigger concerns after Thursday night's episode.

All they want is for Jerry to say amen after a prayer for Vee.

After what seemed like an impossible situation to survive, both Vee and Jerry seem to have survived Diamond's scheme of revenge. However, at the moment, it is not looking great for them.

Vee seems to have lost her memory and both Jerry and Twitter are worried she may be gone forever. But, that wasn't fans' biggest concern, instead they wanted Jerry to say "amen" at the end of his prayer.

They had the memes for that too. Just say "amen" daddy J...

Am I the only one who was waiting for Jerry to say Amen? #TheQueenMzansi pic.twitter.com/mbki0QJR20

#TheQueenMzansi am I the only who didn't hear Daddy J say 'Amen'? pic.twitter.com/B369PY6zrx

#TheQueenMzansi Hau Vee? After Jerry pours out his soul and gives God a phone call for you... as for "ungubani?"💔 pic.twitter.com/5uUgc5ztCR

Vuyiswas wig is the 'Chuck norris' of wigs. It survived a kidnapping, bomb and a coma.
Vee gets shot once and dololo memory.
She should have hidden her brain under that wig.😂😂#TheQueenMzansi pic.twitter.com/ajjGX2fk35

#TheQueenMzansi first the Lord works a fast miracle and now Vuyi doesn't even know who Jerry is. Amen! pic.twitter.com/zqUmstuV8A

So vee vela vela has lost it ??? Literally #TheQueenMzansi pic.twitter.com/R7idbH6h7X

Vuyiswa lost her memory because Robocop forgot to say 'Amen'
He didn't complete the prayer therefore his wish was also not completely granted. #TheQueenMzansi
God's waiting for the 'amen'
Ere 'AMEN' Jerry pic.twitter.com/bh4yomUkEq

So Jerry... next time you pray can Twitter please get an amen?

The SABC has hit back at accusations of concept theft.
TshisaLIVE
4 years ago

Nathi is back and he promises that his long awaited album will be well worth the wait.
TshisaLIVE
4 years ago

Although Black Coffee has not commented on the incident, he did post a message on Twitter that many saw as a prayer for Enhle.
TshisaLIVE
4 years ago

Khanyisa Bunu's role as Dambisa has impressed Scandal! viewers but she's here to tell an important story.
TshisaLIVE
4 years ago