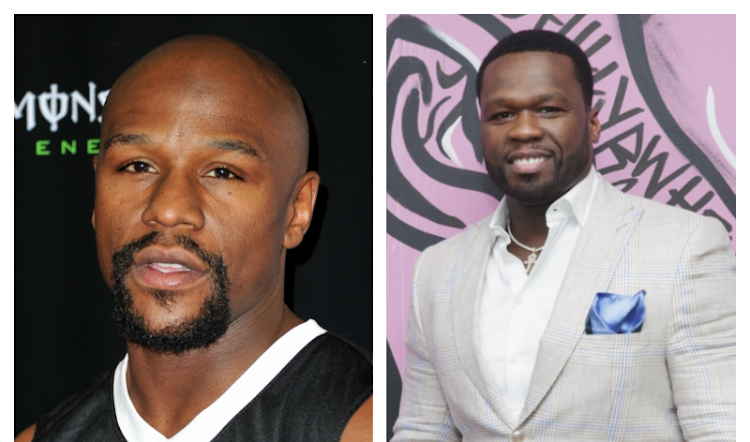 The feud between rapper 50 Cent (real name Curtis Jackson) and boxer Floyd Mayweather has reached... no... invented a whole new level of petty, and it looks like neither of them is going to back down.

It's so petty, but oh so juicy!

You know that feeling when you know deep down that the conflict between two people is unnecessary but you follow their beef anyway because the shade thrown around is so much it could protect us from the hot African sun?

Well that was us and practically everyone else on social media this past weekend, when Floyd Mayweather and 50 Cent ripped each other to shreds in a verbal boxing match.

We mean... why are they even beefing?

Well.... nobody really knows where exactly the beef began however according to Metro.co.UK it has something to do with 50 Cent claiming Floyd stiffed him $2 million back in 2012. This is the second time in a matter of months that their ongoing feud caused a social media frenzy.

We really can't pin it down but they always go for the jugular when they exchange words. There's never a shortage of dirty laundry and spilling of hot tea, so despite knowing better we ouchea camping on their Instagram with our popcorn.

So wah had happened was...

Floyd threw the first punch, with long... no like a really really long stinging letter to 50 Cent.

In his post he basically pulled a Pusha T, airing all the dirty laundry he had on 50 Cent. He spoke about how his baby mama and his sons want nothing to do with him. How he's broke, a snitch, an identity thief and almost everything in between.

Curtis “Confidential Informant” Jackson, you're mad because your oldest son Marquees mother doesn’t want to be with you! Your Son, your own flesh and blood don't want nothing to do with you! You haven't had a hit song on radio in who knows when and you’re definitely not hot enough to even sell records anymore so Interscope dropped you. You are jealous of any rapper, athlete or entertainer that’s hot or got something going on for themselves. You are a certified snitch and we got paperwork to prove it. You talk about Ja-Rule but you stole his whole style and ran with it! You’re the only self proclaimed gangster that’s never put in work! You need to pay homage to the real 50cent for stealing his name and his storyline. Your claim to fame was getting shot numerous times & living to tell it and you think that's Gangster? Where at? You’re currently living in a fucking apartment in Jersey, you are always in somebody else's business just to stay relevant. You should just become a blogger cause it’s obvious you don’t have nothing going on in your life. Are you mad that Kanye West ended your career? The only thing you got going on is Power and everybody watches that because Ghost is a dope ass character on the show. You can leave the show everybody will still watch Power, but out here in the real world I’m The Real Ghost. That’s not a Mansion in Connecticut that you're in debt for, that’s a dump, a money pit an oversized trap house! It was dope when Mike Tyson had it in the late 80’s early 90’s, but you couldn't afford to maintain it. You’re always talking about somebody is broke, but the last time I checked it was Curtis Jackson that filed for bankruptcy not Floyd Mayweather. So quick to gossip like a Bitch, why don't you tell everybody how you got Herpes from DJ. Where's your memes for that, huh? Or better yet, post on how your Coca-Cola deal wasn’t really 300 million you fucking liar and tell how that spinning G-Unit necklace that somebody got robbed for was fake. Just remember, I was with you everyday and your driver Bruce was my driver also. I know where all your bones are buried, so be easy Curtis Jackson! And by the way, don’t ask to borrow no more money from me.

Clearly mocking Floyd, 50 Cent didn't even bother with the long text, he just typed up what he thought was Floyd's first draft of the diss Instagram post.

This was Floyd rough draft before he got his ghostwriter involved.😆 LOL 😆get the strap #lecheminduroi

We still don't get the point of the war of words but you got to admit it's entertaining and kinda pathetic.

This may be the kind of stuff really rich people do out of boredom...