Mzansi Magic has another EPIC crossover for fans 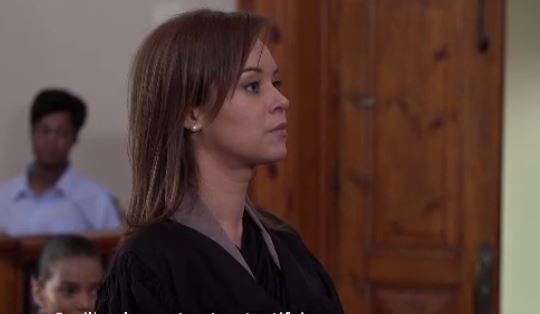 Shannon Esra had 'The Queen' fans feeling all kinds of ways with her role as Sandra Stein, and now she is heading to "The River'.
Image: Via Mzansi Magic

Two TV worlds are set to collide on Thursday when popular lawyer on Mzansi Magic's The Queen, Sandra Stein, appears on The River to represent a client.

Sandra, played by celebrated actress Shannon Esra, had even the devil shaking in his boots when she represented Harriet (Connie Ferguson) in the court case following Jerry Maake's murder on The Queen last year.

Her character became an overnight sensation and was said to be so tough she could make bodybuilders cry.

But several months after dominating screens, TshisaLIVE has learnt that the lawyer is coming back to the box to defend Lindiwe (Sindi Dlathu) on The River in her divorce case against her estranged hubby Zweli Dikana (Hlomla Dandala).

Speaking to TshisaLIVE, Shannon said she was blown away by the crossover that will take place on the show this week.

"It is a wonderful opportunity to see characters outside of the shows we know them. Sandra really took off with audiences and so there is a great expectation but I don't think people will be disappointed. It's so exciting."

Shannon spilled the tea on how she manages to prepare for such a mean role.

"I obviously learn my lines but beyond that I go over the scene, over and over again so that I can be as slick as possible. I want to show the power she has. I have decided that she has a lot of duality and hates losing. It's not every day that you see women with such a strong ego."

The channel previously tried their hand at a crossover for scenes between Isibaya and Ayeye in 2015.

Tweeps thinks that Jerry's "incomplete" prayer is the problem here...
TshisaLIVE
3 years ago

There were guns and drama galore, but who is the real queen?
TshisaLIVE
3 years ago

Diamond is dead? Nah fam, The Queen fans think he'll do a Lazarus

If Jerry can come back from the dead, so can Diamond.
TshisaLIVE
3 years ago