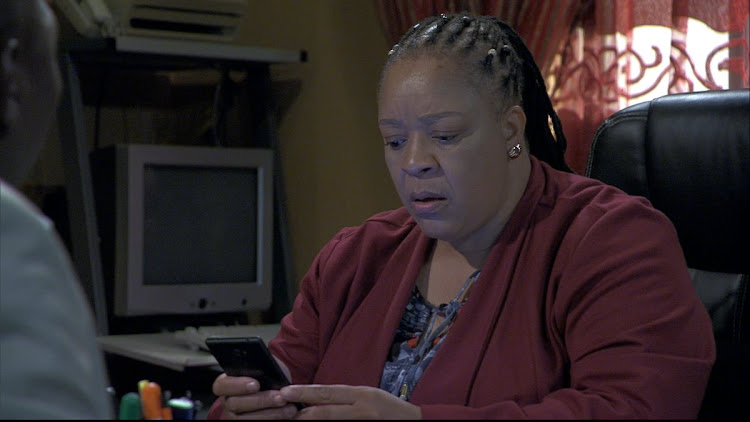 Principal Thobakgale has been going through the most.
Image: Via Twitter/Skeem Saam

You know how everyone can say "yebo" but when Busiswa says it can unlock the VIP gates at any party? Well, Twitter is convinced that former principal Thobakgale's "voetsek" has the same effect!

Skeem Saam viewers have watched Jacobeth Thobakgale going through the most after her fraudulent activities caught up with her and saw her being suspended as the principal of Turf High.

On Wednesday night Mma Thobakgale had a dream where she was still principal and all the teachers were singing her praises, but it was interrupted by a telemarketer phone call.

The "arg man! Voetsek!" she cried out before cutting that phone call sent waves across Twitter. They had the memes ready!

From such a nice dream to being woke by a promotion call!🤣🤣🤣🤣🤣🤣
Mma Thobakgale #SkeemSaam pic.twitter.com/PEOaJm0duu

That "arg man Voetsek" by principal Thobakgale I felt it 😂😂 #SkeemSaam @SkeemSaam3 pic.twitter.com/WJ4TEE990x

That "Voetsek" of Former principal Thobakgale is a TKO 😂🔥🔥🔥🔥 #skeemsaam pic.twitter.com/Beh5wlFx3R

"I think they are taking chances...it makes my heart bleed to see actors in this space."
TshisaLIVE
3 years ago