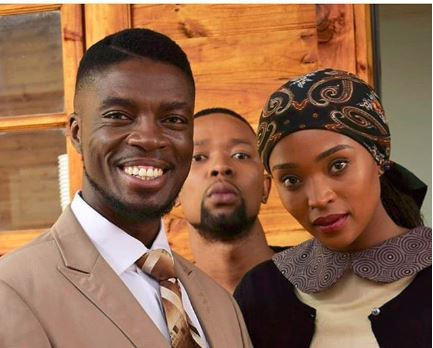 The Queen's Madi (left) is back and could potentially end Mmabatho (right) and Shaka's (centre) marriage before it even begins.
Image: Via Instagram

It seems like viewers of The Queen are in for way more drama than they bargained for where Mmabatho's wedding is concerned. Why? Because Madimetja is back and it's all thanks to Gracious.

According to Gracious there will be a wedding. Except it won't be Shaka at the altar, but rather Madi.

In case you forgot who Madi is, he's that Bible loving guy from Limpopo that was supposed to marry Mmabatho after their families arranged it. However, he accepted defeat after Shaka won Mmabatho's heart and he left with his tail between his legs. But it looks like he's back to fight for one last chance.

His return is stressing all the #TeamShaka viewers because they thought he would get his happy ending.

Now that Madimetja is back, suddenly Mmabatho wants to be challenged intellectually? Witchcraft straight #TheQueenMzansi pic.twitter.com/50VHFdiSf2

I cant believe im seeing that source of annoyance madimetja on my screen again #TheQueenMzansi pic.twitter.com/7hGkbbIiX0

Sorry i didnt watch #TheQueenMzansi last night but can i ask.... what is Madimetja doing back here? pic.twitter.com/Sen6bmpNws

I don't see myself le a man like Madimetja.
Hai ka hana.#TheQueenMzansi pic.twitter.com/64xdRXw4Te

The notorious Madimetja is back. Is Mmabatho gonna run back to her? #TheQueenMzansi pic.twitter.com/vfqM19RFdI

Who is also so excited to see Madimetja back. ❤👍#TheQueenMzansi pic.twitter.com/jZHlVADjzX

"I think they are taking chances...it makes my heart bleed to see actors in this space."
TshisaLIVE
3 years ago