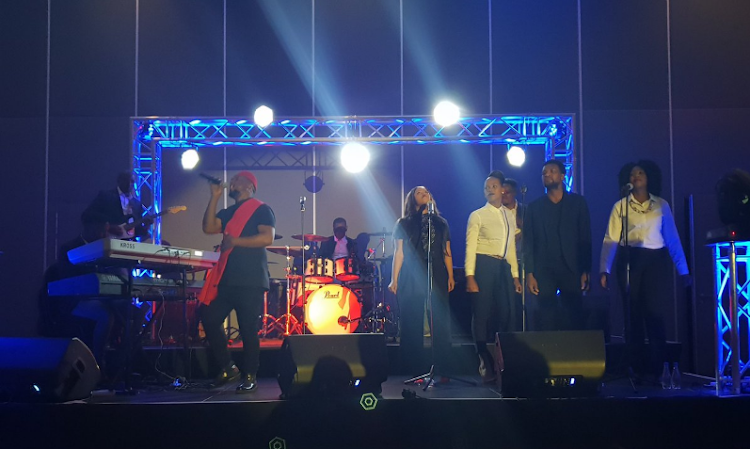 Nathi Mankayi blew the crowd away as he sang songs from his upcoming album.

Judging by the live audience reaction and the social media craze on Wednesday night, after Nathi Mankayi shared music from his upcoming album Uphupha Labantu for the first time, it's already a winner!

Iphupha Labantu will give his fans a happier, mature and more spiritual Nathi, he told TshisaLIVE.

Nathi broke into the industry with his hit song, which became 2015's unofficial national anthem Nomvula. The song came from his first album Buyelekhaya, which was a resounding success.

The singer's second album, Umbulelo Wam, didn't do as well on the market but Nathi explained to TshisaLIVE that it wasn't that the music was bad, it was just everything else that distracted Mzansi from what he was offering.

Nathi is back and he promises that his long awaited album will be well worth the wait.
TshisaLIVE
3 years ago

He described his third offering as a happy album.

Nathi added that he was in a happier space in his life and that his maturity, and joy would come through in the album.

Nathi' s manager China, takes to the stage and acknowledges the people behind scenes.#iphuphalabantu

"This is a happy album. It's different because Nathi is in a happy space at the moment."#iphuphalabantu

The name means "The People's Dream" It is more than a name, it holds a deep meaning for Nathi and his family. - China says.#iphuphalabantu

The reaction from the crowd at the album launch hosted at  Hill On Empire in Parktown is certainly an indication that he's back to claim his throne as the most soulful afro pop singer.

Watch some of the performances below:

The band is making its way to the stage... the last lady that takes to the stage is Mrs Mankayi.#iphuphalabantu pic.twitter.com/llc4Dj0qCu

LISTEN: Nathi sings a song from his new album.

Is Nathi Mankayi truly back?

📽: This definitely sounds like a joyous album. The most we've ever heard from an otherwise always mellow Nathi 💃💃💃#iphuphalabantu pic.twitter.com/g6oyHbAdWo

WATCH: Nathi and Mrs Mankayi take on a song together.

This here might just be the 2018 wedding love song! 🔥🔥🔥#iphuphalabantu pic.twitter.com/IzZNna5CM3

The album launch was attended by the likes of Siphokazi, Arthur Mafokate, Zandie Khumalo, Nambitha Mpumlwana, Tresor, Berita and Eugene from Trompies.

Nathi's album  will be available nationwide and on line on Friday July 27.

Joining us for this auspicious occasion @tresorofficial with our GM @rabobie72 Its a big evening here at Gallo Records! #IphuphaLabantu from @_Nathimankayi is heading your way SA!! 👏🏻🎤 pic.twitter.com/L0FoJb2ub3

Thank you message from Deputy Minister Stella Ndabeni-Abrahams this evening ahead of @_Nathimankayi album launch #IphuphaLabantu Thank you for joining us! pic.twitter.com/gHBOqZqeGE