A theatre great has fallen! 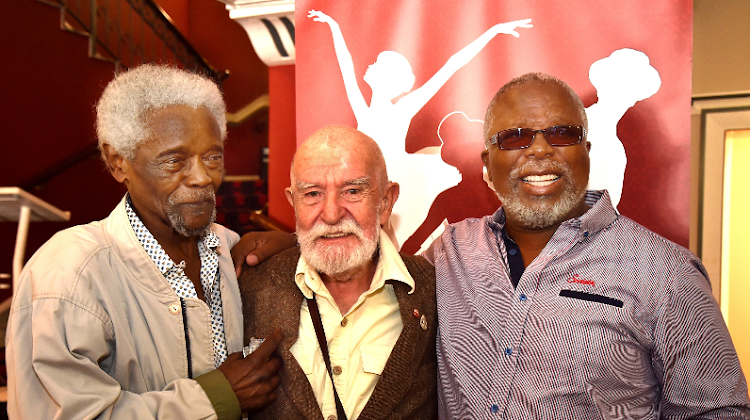 The late Winston Ntshona with Athol Fugard and John Kani.

South Africans have been in a state of mourning ever since the death of veteran playwright and actor, Winston Ntshona was confirmed on Thursday.

The iconic theatre great and anti-apartheid activist died at the age 76, after being ill for eight years.

The actor's contribution to the South African entertainment industry is immeasurable.

While most young people may be familiar with his more recent gigs such as his cameo appearance on The Heartlines: Grace and The Heartlines: The Bet, Winston has been shaping talent and creating amazing content for over five decades.

Winston started his career in 1965 when he formed the Serpent Players in Port Elizabeth with playwright Athol Fugard and actor John Kani. From there, the pair created pioneering South African plays.

While there are a million reasons why Mzansi is heartbroken over Winston's death, the creative industry has particularly lost a great mentor.

Here are five reasons why Mzansi is in mourning:

1. Winston helped shape the careers of many people who have since become stars in their own right in Mzansi and the world.

Actors like Sello Maake ka Ncube, Owen Sejake and Thembi Mtshali have been inspired and some of them even personally mentored by the theatre great.

2. Winston is responsible for some of the most amazing theatre plays to come out of SA.

Plays such as Sizwe Banzi Is Dead and The Island were created by him.

Both have won numerous awards for their contribution to theatre, including Broadway’s prestigious Tony Award in 1975 for writing and acting Sizwe Banzi Is Dead.

4. As an anti-apartheid activist, Winston's effort played a big part in letting the world know of the situation in South Africa during the liberation struggle through art.

In 2010 Winston was among the recipients of the National Orders Awards. The actor was honoured in the category of Ikhamanga, together with the late City Press editor Percy Qoboza. At the time, former president Jacob Zuma said Winston used the stage to expose life under apartheid to the world.

He poured his heart into every character he played.

Actor Owen Sejake on acting through the 'eras'

Over four decades after his debut as a professional actor, Owen Sejake is one of the most recognisable faces in the industry, who has lived through ...
TshisaLIVE
3 years ago

A new facet of Mandela revealed

Owen Sejake is preparing to tackle what is potentially the role of his life - portraying Nelson Mandela in the new South African play The Prize of ...
TshisaLIVE
9 years ago

Sello Maake kaNcube has joined hundreds of South Africans in paying tribute to veteran actor David Phetoe, calling him the perfect gentlemen and a ...
TshisaLIVE
3 years ago

When we talk about legendary actors... we are talking about the likes of Thembi Mtshali whose track record in the industry speaks for itself. But ...
TshisaLIVE
3 years ago