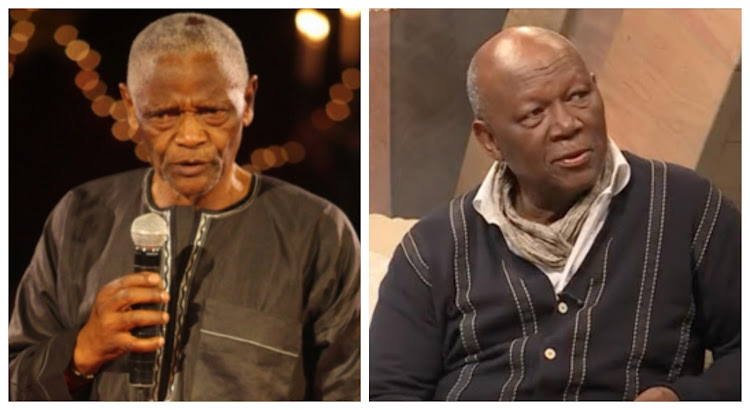 Mfundi Vundla has added his voice to the outpouring of tributes that have emerged in the wake of actor and playwright Winston Ntshona's death on Thursday.

Winston's son Lawula confirmed his father's death on Thursday morning and said he had been ill for eight years. "Thus far we are just reeling in shock but we are coming together as a family‚" he said.

Winston's work with the likes of John Kani on plays such as Sizwe Banzi Is Dead and The Island, has been celebrated around the world and changed the life of Mfundi as a young producer living in exile.

Mfundi told TshisaLIVE that Winston's legacy and work was the best memory Mzansi can have of him.

"I remember the first time that I saw Winston was in his play with John Kani, Sizwe Banzi Is Dead. Up until then I had never seen a play like that before. He performed it at such a high level. It was a life-changing experience for me," Mfundi said.

Mfundi added that he travelled from Boston to see the play and was in awe of Winston's talent.

"I was in exile and living Boston but I remember travelling to go see the show but it really changed my life."

Speaking on SAFM, John Kani said he was devastated by the news of his old friend's death and described him as a brother.

Young actress Nambitha Ben-Mazwai took to social media to post a picture of herself with Winston and said he was the reason she decided to become an actress.

Nambitha remembered how she promised to bring Winston an Oscar.

I actually am numb. My uncle, and absolute inspiration. The reason I changed careers to pursue my calling. I made a promise to you last year, that I will bring home the oscar to add to your wall of fame. I've never been more determined. RIP Nkomo #WinstonNtshona pic.twitter.com/xOrTMhRHD0

Meanwhile, social media has been flooded with tributes and messages remembering the star.

Rest in peace to one of the legends of theatre, utat'u Winston Ntshona. Few years ago I had a privilege of watching him and tat'u John Kani, "Sizwe Banzi Is Dead" at The PE Opera House. Phumla ngoxolo. pic.twitter.com/IMMKffaHgN

The greatest pleasures as a theatre goer was that I once got to see John Kani and Winston Ntshona perform Sizwe Banzi is Dead. pic.twitter.com/GgjYldBe9B

Saddened to hear of the passing of #WinstonNtshona today. A prolific South African thespian and playwright who has died at the age of 77. Thank you for your contribution to our industry. #RIP

#MHSRIP bro #WinstonNtshona has been a great role model in around the bay,thanks to his family for his life,condolences to his love ones.