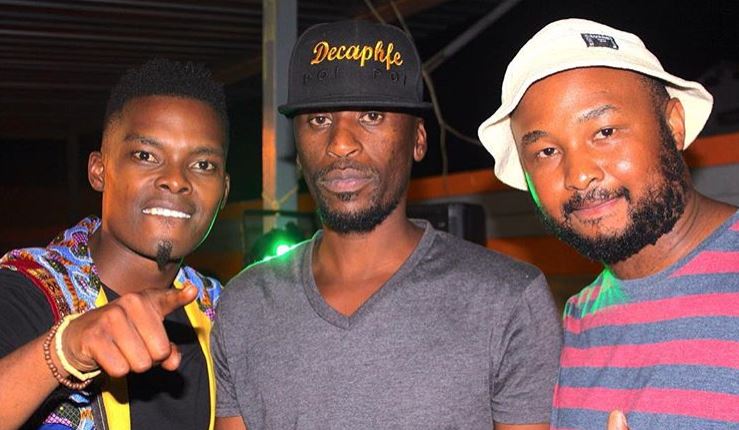 Dumi, Bongani and Thato were the best of friends and were inseparable.
Image: Via Thato's Instagram

A year ago today, Thato Mabaso was settling down for the night and pouring himself something to drink when the phone rang. The panicked voice on the other end of the line told him that they heard gunshots come from near a car where his two best friends Bongani Khumalo and Dumi Masilela were parked. His blood ran cold.

Bongani was not answering his cellphone. When Dumi did, he simply said: "I've been shot. I'm going to the hospital".

"I remember throwing my glass across the room and rushing to the hospital," Thato told TshisaLIVE this week.

"Dumi greeted me with the biggest smile and I thought that he would be okay. That was one of his strongest qualities, he always made you feel like you were going to be okay. He was the most optimistic person. I had hope. I called his wife earlier to tell her, her husband had been shot, but a few hours later... she would be the one calling me."

The tears that followed, both in public and private, in the year since that day have been some of the most bitter for the young film producer.

"At times I feel like I have to be strong for Bongani because he took it worse than I did. He was in the car that day. I know that one of us has to be the shoulder for the other. On my own it affects me, I have been told that it is okay to cry so I do that a lot," he said.

Thato Mabaso on Instagram: “It’s so difficult to comprehend the fact...

Thato lost a sister when he was young and viewed Dumi as his brother. He said that he and Bongani have tried to keep Dumi's spirit alive by doing things they would have done as a trio.

"The three of us were a pack. There was nothing we wouldn't do without each other. We would go to the Tembisa Street Market together and so we had a little six months memorial for him there. We've also done little things like celebrate his birthday because those were times we always planned to spend with him."

Dumi died only months after marrying his sweetheart Simphiwe "Simz" Ngema in a traditional ceremony.

Thato was at Dumi's side when he married Simz and he too was heartbroken that his friend died just two days before seeing him get engaged.

"I proposed on the 5th (of August) and he wasn't there to see it. He knew everything about the proposal. He was with me when we got the ring. There was nothing he didn't know".

Thato is not sure if the pain of losing Dumi will ever go away but he is grateful to have spent so much of his life alongside his "brother and hero".

"None of us have really come to terms with it. We are all trying. But his spirit never died. It carried on inside us all."

Friends remember the impact Dumi had on their lives and the support he gave them.
TshisaLIVE
2 years ago

Sunday marked one year since Simz Ngema and Dumi Masilela tied the knot.
TshisaLIVE
2 years ago

Simphiwe "Simz" Ngema has once again reflected on the devastating grief she experienced in the weeks following her husband's death, revealing that ...
TshisaLIVE
3 years ago

Year in Review: Simz Ngema was heartbroken but heroic in the face of tragedy

"Nothing prepares you for one day to be a 27-year-old widow. That all the dreams you've dreamt of will be taken away from you," Simphiwe Ngema told ...
TshisaLIVE
3 years ago
Next Article