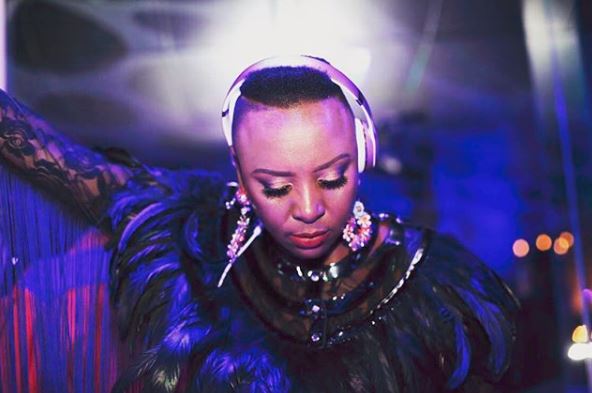 DJ Queen Choco aka Wanda Baloyi is set on setting the dance floors on fire.
Image: Via Instagram

When musician Wanda Baloyi announced that she would be taking on the DJ scene as Queen Choco, her fans panicked and thought she was "killing" Wanda the jazz singer, but almost a year later both Queen Choco and Wanda are thriving.

Speaking to TshisaLIVE Wanda reflected on her journey and how she's had to defend her decision to be a DJ and reassure her jazz fans that she wasn't going anywhere!

Wanda said that for some time after she introduced Queen Choco to Mzansi, she had to prove herself because people would walk right next to the stage just to see if it was really her doing the mixing on the deck.

"I know when I started DJ’ing a lot of people wouldn't even dance, they would just stand there to make sure that I'm actually doing my own mixing. They would just stand there and ask questions like, 'is she really doing anything there or just looking pretty next to the desk?' or say things like, 'is she just playing a CD or whatever?' I had so much pressure to actually prove that I was really DJ’ing and I knew what I was doing."

However, Wanda didn't let the doubt deter her, this was a lifelong dream and she couldn't let it slip past her.

"I've always felt that as DJ, I have something absolutely unique to offer. My story alone is interesting, in the sense that I come from a jazz background and I decided to jump into house music. I sing and DJ."

Wanda explained that her alter-ego allowed her to explore her 'wild' side.

"Ultimately Queen Choco is my core. My pure love and passion for music. The reason I decided to DJ is because I love soulful and dance, tribal music. That is why I absolutely love DJ’ing.

"Queen Choco is crazy and she goes to all these different spaces and it's totally amazing. The thing is Wanda is a very specific kind of sound and only caters for a specific kind of market, whereas Choco is a like bottomless coke. I mean with her I go to the weirdest spaces or the fanciest place, like everything. There's just fearlessness all round with her."

What's next for the DJ? More and more gigs!

As part of women's month celebrations, Queen Choco will be making ladies break it down at the Standard Bank Joy of Jazz's picnic for women on August 11.

Wanda said she was happy that people were finally accepting  Queen Choco because all she wants to do is make the people dance!

Bonnie wants to take time out to help address the scourge of depression.
TshisaLIVE
2 years ago

"To be a woman is to be a strong and resilient being who is able to handle anything that comes her way. I don’t need to be saved or rescued," said ...
TshisaLIVE
2 years ago

Mshoza is in a good space and getting gigs, like at the Kwaito and House Music Awards.
TshisaLIVE
2 years ago

Nomsa said she's yet to recover from almost being raped.
TshisaLIVE
2 years ago
Next Article