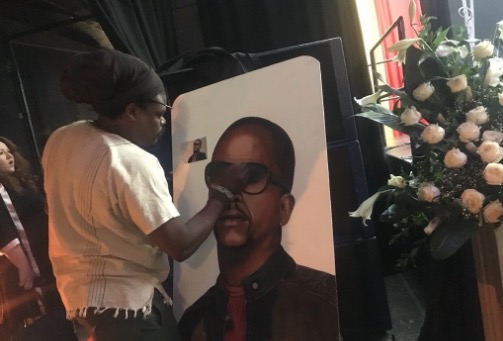 Lebani Sirenje aka Rasta at ProKid's memorial.
Image: Via Twitter

Celebrity funeral artist Lebani Sirenje aka Rasta has once again failed to get a stamp of approval from fans, after his attempt to paint a picture of ProKid.

Rasta has become popular for paying tribute to celebrities and political figures by painting portraits of them at the memorial or funeral service.

Even though Rasta means well and it's his way of honouring a fallen figure, Twitter hasn't been sympathetic to his depiction of personalities.

Shortly after pictures of an unfinished portrait of ProKid emerged on Twitter, fans ripped it to shreds.

This guy though 🙈 for every funeral pho & with so much practice you woUlf think he has mastered the paint brush by now, someone.. anyone, pls take away the pain brushes #ProKidMemorial pic.twitter.com/HVdanEfjC3

This Rasta must yehlisa on the trees before painting 😂 #ProKidMemorial

I get Rasta's interpretation, He is a painter not a photographer #ProKidMemorial

I honestly get Rasta’s heart. His is a different kind of art. He religiously shows up and does his thing, no matter what we think. #ProKidMemorial

Meanwhile, the entire hip-hop community including AKA, Cassper, Kwesta, Slikour, HHP and others joined forces at Bassline to honour ProKid.

AKA struggled to find words to express his feelings, saying that ProKid was one of the most charismatic and intelligent people he met.

Kwesta said everything that he is as a rapper is because of ProKid.

WATCH | 'He would've wanted us to be happy, let's have a MF party' - AKA's tribute at ProKid memorial

AKA described ProKid as one of the most charismatic and intelligent people he knew.
TshisaLIVE
3 years ago

WATCH | ProKid's brother pays tribute to his 'idol' at memorial

Hundreds of mourners have gathered at Bassline to pay tribute to ProKid.
TshisaLIVE
3 years ago

Mourners have gathered at Bassline in Johannesburg to celebrate ProKid's life.
TshisaLIVE
3 years ago

ProKid's wife breaks her silence: 'I'm numb by the situation'