Lihle Msimang's fate in comedy was decided by her folks

Lihle knew telling her parents that she wanted to be a comedian would be tricky, but their approval was the fuel she needed! 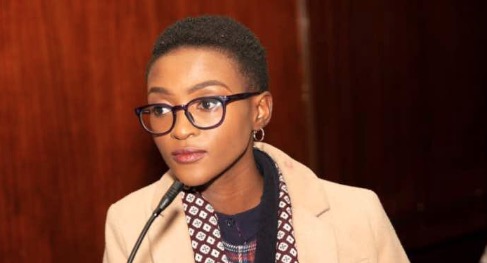 Comedian Lihle Msimang is one of the funniest people you'll ever meet.
Image: Via Twitter

For Lihle, it took seeing her parents laugh out loud at one of her shows to confirm that she was ready to totally devote her time to comedy and since then she hasn't looked back!

Born and bred in Meadowland Soweto, Lihle explained to TshisaLIVE that she knew that breaking the news of her plans to try to do comedy for a living was going to be tricky.

So she got her parents front row tickets to her shows instead.

"After trying out my stand up for a couple of times, I told my friends about it. I didn't really talk to my parents about it because I didn't know how to approach the situation with them. Because you know, black people, we don't believe such things can be careers. So I had to find a way to let the folks know."

When she finally worked up the courage to give her folks the tickets, Lihle said she left the fate of her career in their hands.

"After I performed a couple of times and won a competition that allowed me to have my own slot, I said to my mom and my dad, 'Please come through to one of my shows.' I said to them, 'If you disapprove I'll stop but if you laugh I'll continue.'"

Lucky for Lihle... her parents were in stitches! From that moment on her confidence was on a 100.

Lihle explained why her parents' approval gave her a push like no other.

"If my parents think I'm funny, then I'm the most hilarious person in the world!"

The 29-year-old comedian said she changed her mind multiple times before she decided that she would settle on comedy.

Lihle explained that while watching Katt Williams back in varsity, she and her friends had the bright idea to try stand-up comedy together. At the time, the plan was just to open for other people and help hype up events through comedy.

Fast forward to 2018, she performed alongside the world's funniest comedians at the Blacks Only comedy show and was one of the comedians whose jokes were still trending on Twitter two days after the Jozi edition of the show.

For Lihle, the moment was surreal.

"It's amazing that my progress and where I am often click (in my head) after the moment has passed. Like Blacks Only for example, before the actual show happened I was just working to ensure that I do the right thing but when the show arrived, it was only when we did sound check where I was 'Wow! I am here.' I treasure those moments. When the people laugh at the first joke, then I know."

Lihle said people like David Kau, Mpho Popps and Sifiso Nene mentored her even without knowing and that she was grateful for what they have done for SA comedy.

Her real name is Amala Zandile Dlamini and her daddy is an icon in SA.
TshisaLIVE
3 years ago

Twitter already feels Thembsie Matu deserves all the awards available... The #DStvMVCA and even an Oscar, an Emmy, a Tony... plus a SAMA!
TshisaLIVE
3 years ago

You may not know her, but you will mos def remember her after Benni is done with y'all on The Queen.
TshisaLIVE
3 years ago

"Women are always seen as part of the makeup or wardrobe team only. It is time that more women step into directing or producing," says Lerato Marabe.
TshisaLIVE
3 years ago