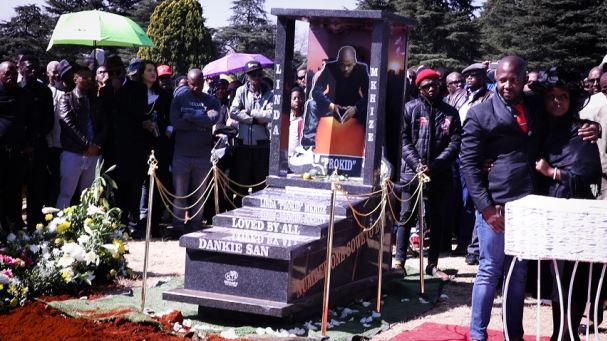 ProKid's tombstone embodies who he meant to his family, Soweto and Mzansi.
Image: Xanderleigh Dookey

Mourners who gathered at Westpark Cemetery on Sunday were left speechless at the unveiling of his tombstone, which embodies the life the rapper led to the tee and the pride he had for Soweto.

It has been revealed to TshisaLIVE that the jaw-dropping structure weighed 1.2 tons and cost about R100,000 to make, but was "money and time well spent".

Manager of Khaabo Tombstones’ Nthato Nkwadi said the 'one of a kind' tombstone aimed to embody what Pro meant to his loved ones and the legacy he's left behind.

"The estimated cost of to make the tombstone is approximately R100k. The most expensive things were the usage of colour, which we created through liquid lamination but it was all worth it."

Nthato said that Pro's family was involved in the entire process because they wanted them to be happy with the final product.

"We started working on the tombstone on Thursday and throughout the whole process, we were in constant communication with the family."

He said that it was also important for them as a company that it based in Soweto to capture what Pro meant to the township and South Africa as a whole.

"We understand what a tombstone represents and because I am personally a fan of Pro, it meant a lot to me and my team to also show that element. I only ever met Pro once in real life but his music has impacted my life, just like many of us in Soweto."

It took a team of 16 people to manufacture the unique structure, which has elements such as lights and rare use of colour instead of the usual black and white engraving.

"The family were exceptionally happy with the final product and its work we are also proud of. We also don't believe in duplication and therefore know that they'll never be another one like this one. Just like, there will never be another number one Soweto boy!"

See the snaps of the tombstones in the below article:

ProKid was honoured with a fitting send-off.
TshisaLIVE
2 years ago

ProKid has been laid to rest at Westpark Cemetery after an emotional funeral service.
TshisaLIVE
2 years ago

Linda Mkhize has transitioned. The monumental emcee‚ known to legions of admiring South Africans as ProKid and later Pro‚ died on August 9 from ...
TshisaLIVE
2 years ago
Next Article