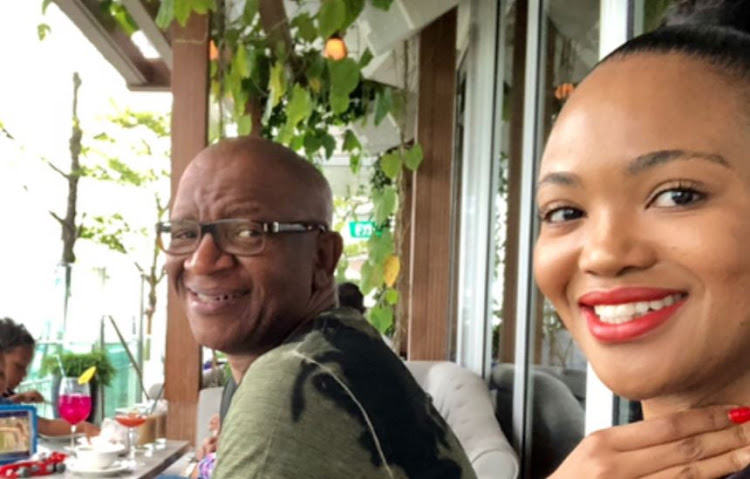 Lebo M and his bae Mel have been travelling the world together.
Image: Via Lebo M's Instagram

Music producer and Lion King boss Lebo M can't stop gushing over his bae Mel Ntsala, telling her that she brought joy into his life when he had "lost all hope".

The star took to Instagram to pay tribute to Mel on her birthday and reveal how she managed to capture his heart.

"Where do I begin I mean, how do you celebrate someone that more than six months ago dropped a bomb of joy in your world, when one had lost all hope? What do you give one who has given you so much more with just a smile?" he wrote.

He added that people should be grateful for "another chance at love and never lose faith".

So....where do I begin I mean, how do you celebrate someone that more than 6 months ago dropped a bomb of joy in your world... when one had lost all hope ? What do you give one who has given you so much more with just a smile...ohhhh I know, tell her Happy Birthday 🎉🎁🎈 Baby and ohh yeah one more thing, be grateful for another chance at love ❤️ and never loose faith happyyyyyy...happy birthday Baby @mel_ntsala ( Now, I know this is going to piss a lot of friends and family in SA but I gotta get you to LA 🇺🇸🇺🇸✈️✈️🚀🚀real quick to cut that Cake 🎂 ) I love you ❤️💕

Speaking to Sowetan two months ago, the couple revealed they had met at a friend's house but were not planning to get married anytime soon.

"We met at the house of a mutual friend. We are very happy with our relationship as it is and we have no marriage plans. Not now or in the future".

Lebo M has previously dated Generations actress Zoe Mthiyane, with whom he has a daughter. The couple ended their engagement in 2016.

Speaking to TshisaLIVE late last year, Lebo M hit back at the constant media reports about his private life, claiming the country should be focused on the "blesser culture" it has instead of judging him.

"I think we need national therapy. We are a society that condones and glorifies a blesser, which, in my view, is sophisticated prostitution, and then a guy like me who has only been married four times [he married the same woman twice] becomes a villain. It's like a f*cken' taboo for me to build a family and try to build myself as an individual."

Lebo M to his son: 'You are our pride and joy'

Even though Lebo M wears many hats as a world-renowned producer, one of the roles he's evidently super proud of is his role as a father.
TshisaLIVE
3 years ago

Lebo M on being 'broke' and the dangers of blessers

The Lion King producer and musician Lebohang "Lebo M" Morake has achieved a lot in the over 20 years he has been in the industry but SA about its ...
TshisaLIVE
3 years ago

I will probably die producing The Lion King – Lebo M

As The Lion King producer Lebohang "Lebo M" Morake prepares to launch a world tour of the award-winning theatre production to celebrate it's 20th ...
TshisaLIVE
3 years ago