The man was mad talented! 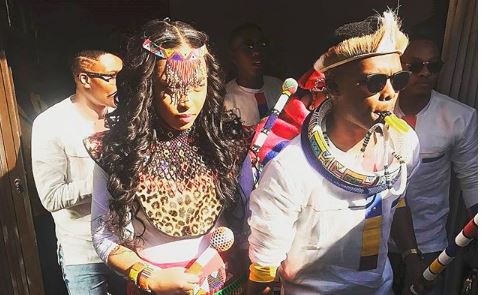 There's no denying that Dumi Masilela was a talented dude and one of the songs he worked on just before his death just over a year ago was released on Wednesday morning.

The song, Uphushiwe, is a love song with a brilliant afro-beat that will get you moving before you know it.

Dumi sings about how he sent his uncle's to his girl's family with lobola and then he sings "now you can come to my family home".

It's no doubt a song that will be played at weddings and will help others celebrate their happy moments.

Simz, who was accompanied by Dumi's best friends Bongani and Thato, shared her excitement with the Fresh Breakfast crew about the release of the sing.

"It feels so different that he's not here with us enjoying this moment because we know if he was here, he would screaming and whatever, you know... and climbing the walls. Because he was just that energy. He was amazing!"

And just in case you feel like you've heard the song before, it's because you have! We first got a taste of the song when videos of Simz and Dumi's wedding surfaced.

This is the very song that Dumi serenaded Simz with during their traditional wedding ceremony.

Simz said that the song will be available sometime next week on all digital platforms and that fans should keep checking her social media pages for the links to it.

Watch: Simz jamming to her man's song earlier on Wednesday at the Metro FM studios.