Fans across the globe are losing their minds! 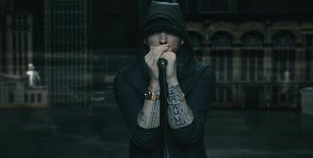 Veteran rapper Eminem just dropped a Kamikaze bomb on the game with a surprise album release on Friday, and fans across the globe are raving about it.

The album, called Kamikaze was released in the early hours of Friday morning and follows 2017's Revival. It immediately raced up the Twitter trends lists worldwide.

Local fans were still digesting Boity Thulo's rap debut single when it dropped and were quick to warm up their Twitter fingers again to share their thoughts on Em's new album.

This album is BEYOND good I'm honestly dumbfounded. Like Eminem coming back to his old ways and literally spitting HEAT on every track is overwhelming as a fan. Like I'm beyond SHOOOOOOK to the core. #Kamikaze is the BEST hip hop album this year pic.twitter.com/FHNkEsCiU5

Most accurate meme right now for me @Eminem #KAMIKAZƎ pic.twitter.com/bMVaVZBj61

Eminem dropped Revival last year Tweeps:"album is wack", "Eminem can do better"
Eminem drops a fire album #Kamikaze
Tweeps: "Eminem fans in 2018?", "who listens to Eminem in 2018"
What do you guys want? I am confused. Y'all are just haters. pic.twitter.com/7NsqRMCf7T

With 13 tracks and just under 46 minutes, the album is a meal to listen to.

Although fans were torn on their favourite tracks, here are just 4 that the streets agree you should be listening to first.

Why did Eminem just Destroy these new Rappers with this verse tho 😭 slim shady is back #Kamikaze pic.twitter.com/hY8rXgQcjV

Killer line: "Lil Pump, Lil Xan Imitate Lil Wayne I should aim at everybody in the game pick a name."

The first track on the album opens with the sound of a bomber crashing into its target and it's chaos from there.

Eminem uses the track to slam "trash" new artists like Lil Yachty and Lil Pump and others.

Killer line: "Get Earl the hooded sweater, whatever his name is to help you put together some words, more than two letters".

Eminem used the song following his title track to take shots at Tyler, The Creator and the Odd Future crew.

I can’t tell who killed who here, Eminem finally met his equal!🙆🏾‍♂️😱💀😨

Killer line: "Like anyone has the f*cking ability to even stick to a subject, it's killing me...We just make a bunch of songs about nothing and mumble. This sh*t is a circus."

If you been sleeping on Joyner Lucas it is time to wake up. The guy is pure flames and all those claims that he was in the same league as Eminem was finally settled when  the pair jumped on a song together. Em also uses the occasion to take shots at trap.

Killer line: "I probably ruined your parent's life and your childhood too, because if I'm the music that you grew up on I'm responsible for you retarded fools."

Eminem contributed a single to the upcoming Venom film and included it at the end of the album. The jury is still out on whether it is any good but worth a listen just because of the hype around the film.

Twitter rants aside, Nicki Minaj does a great job returning to her old rap style

Savage! Three rappers who take diss tracks to the next level

Nicki Minaj, Drake and Pusha T prove it's not just what you say, but how you say it, that makes a diss track epic
Lifestyle
2 years ago

For the past few days Frank Ocean has dominated the internet. You can hardly go anywhere online without hearing about the US pop star and his new ...
TshisaLIVE
4 years ago