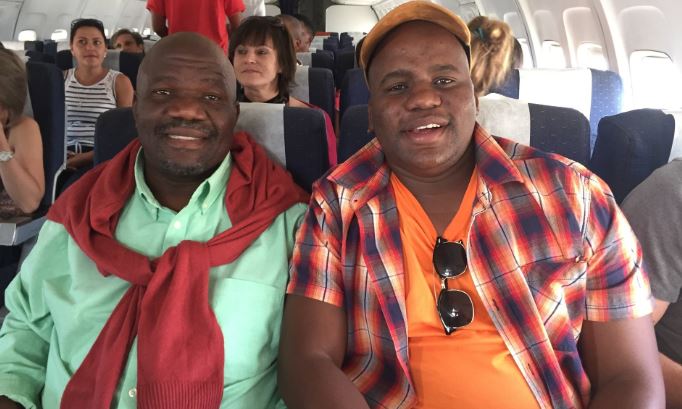 While MaNtuli is trying to sell off her furniture to #PayBackTheMoney, her neighbours  Big Boy and Leshole were living their best lives in Durban.

Fans of Skeem Saam first heard about the trip last week but it almost didn't happen when Big Boy seemed to have lost his ID. The way everyone was mourning, it was like a funeral.

You see, Big Boy and his son never have nice things so viewers thought this was another case of bad luck being their bestie.

Anyways, the pair finally got it all sorted and headed to Durban for their vacay and everyone could breath a sigh of relief.

Biggy was a little stressed, but they finally made it 💃💃💃💃#MabitselasgotoDurban #SkeemSaam pic.twitter.com/0JnW1x56BB

When you get good results for an assignment you did the night before @SkeemSaam3 #SkeemSaam.
👏👏👏 pic.twitter.com/HVMTnWzsju

Actor Thabo Mkhabela, who plays the role of Leshole on the show told TshisaLIVE that it was great to see his character get a break.

"After everything that has happened to him, it was nice for something good to happen to him. I think it was the perfect idea in the perfect place (Durban) and we had fun shooting it. We know that people in Durban love our characters so to go there was very special for them."

He said that fans could expect some crazy adventures during the pair's trip.

"Big Boy is Big Boy and Leshole is Leshole. They are the same wherever they go. I think people will have fun with them as they go around the area and see the sea. It will be fun for them (the audience)," he added.

Meanwhile the streets were flooded with hilarious memes and messages about the trip, calling it the greatest moment in Skeem Saam history.

Say hi to big boy and leshole for me via #SkeemSaam pic.twitter.com/wlw9zaSTL3

The way my heart is SO happy for Leshole and his dad ❤#SkeemSaam pic.twitter.com/1e34etfuQK

Big Boy on that balcony looking like #SkeemSaam pic.twitter.com/v0coo48pzk

Big boi and leshole made it😭👏👏👏
Dreams do come true ppl #SkeemSaam pic.twitter.com/7Arn3cqhuT

There was no shortage of people willing to welcome them to Durban and give them suggestions on where to go.

#SkeemSaam can I welcome Leshole and Big Boy here in Durban pic.twitter.com/X7Iq56kqSZ

@SkeemSaam3 I'm in Durban, I thought I'll meet with Leshole today, But I met with my ex and she asked me to buy her KFC #MabitselasgotoDurban #SkeemSaam

#SkeemSaam Finally Leshole Gets a Break From Pain, I'll be waitin for them here in Durban😅 pic.twitter.com/zYTTMP9AxC

I think we should suprise Biggy and Leshole guys and go enjoy with them i cant contain my excitement lets go #SkeemSaam pic.twitter.com/3rCmy9BoT1

Skeem Saam's Clement on TV return: I was glad because I was broke

Vusi Leremi reflects on the hard times.
TshisaLIVE
3 years ago

Skeem Saam's Leshole: It is every actors fear that they won't get paid

"The cost of living is very high and many of us have families that we have to look after."
TshisaLIVE
3 years ago