"You are only hurting yourself."

Comedian Trevor Noah has weighed in on the widespread outrage that has erupted around Nike's decision to use NFL player Colin Kaepernick as the face of its latest ad campaigns, saying protestors were only hurting themselves.

Colin dominated international Twitter trends list and dinner table discussions on Tuesday when Nike revealed that the sports star is the face of its 30th anniversary campaigns.

Colin has got tongues wagging over the last two years by kneeling during the American national anthem in protest against racial injustice.

Trevor told viewers of The Daily Show on Tuesday he was surprised by the form of protest.

"Wow! People are so angry they're burning their own shoes? You do realise Nike already has your money? They already have your money. You are only hurting yourself," he said.

Trevor went on to claim that "we live in a world now where brands take political issues" but don't give people enough warning.

"All I know is, it's only a matter of time before we ask as many questions about the politics of a product, as the product itself. It will be us walking into stores, with the service guy coming up like, 'Hey buddy, can I help you with anything?'. 'Yeah, I would really like to buy this toaster but, first, what is its views on abortion? Can you let me know?'''.

No better way to stick it to the Man than burning the $200 shoes you bought from him! pic.twitter.com/vEbVT0Z3CF

Colin said he decided to kneel to raise awareness, but the move drew harsh criticism from Republican politicians and US President Donald Trump. At the time Trump said the players had disrespected the military and American flag.

The player is suing the NFL for "colluding" to keep him out of the NFL. Nike has endorsed Colin since 2011 but has not featured him in any campaigns since the controversy. 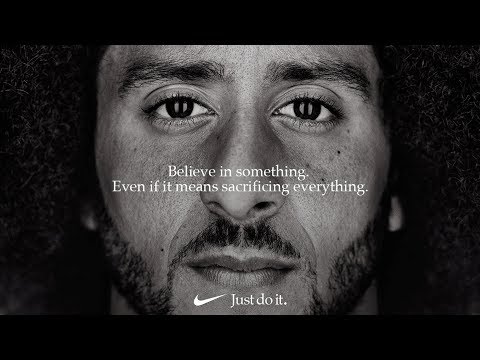