Trevor Noah's reaction to the statue will have you howling. 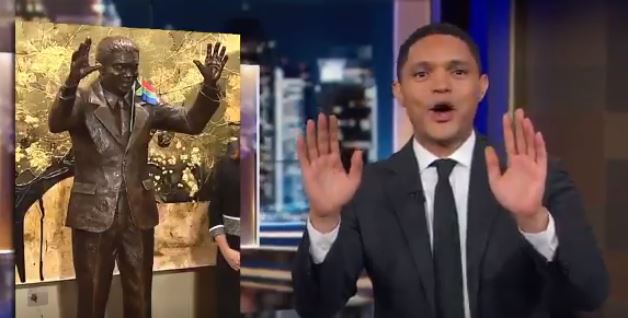 Trevor Noah gave his thoughts on the Nelson Mandela statue at the UN.
Image: The Daily Show

While the jury is still out on whether a statue of former president Nelson Mandela, which was unveiled at the UN this week is a true depiction of the struggle hero, SA-born comedian Trevor Noah has shared his thoughts on it.

The life-sized statue was unveiled by President Cyril Ramaphosa at the world body's headquarters in New York this week and was modeled after the day Madiba delivered his first speech to the United Nations Special Committee on apartheid on June 22, 1990.

It gives me great pleasure to present the United Nations, on behalf of the government and the people of South Africa, this life-size statue of President Nelson Mandela. #UNGA⁠ ⁠ #Mandela100 pic.twitter.com/J9KciUS82K

While the statue has been hailed by some and ridiculed by others, Trevor took to his The Daily Show on Tuesday to share the funny side of the memorial.

"This is so exciting. There is now a Nelson Mandela statue at the UN. I have got to say that this is an interesting pose they chose. It is like he knows he is in America and he's ready for the police," Trevor said as he lifted his hands in the air.

TONIGHT: A statue of Nelson Mandela was unveiled at the U.N. and it’s READY. pic.twitter.com/S9a2oq0yEk

Trevor pointed out that several statues of Madiba showed him dancing  but he could see this one saying, "Don't shoot. I am already dead".

He had the crowd in stitches with his comments with social media users even suggesting that maybe it was time for a "Gupta statue in New York".

Meanwhile, the internet was abuzz with comments on statue.

They said it's mandela's statue bt I zoomed it,it's not him😏😏🤔 pic.twitter.com/5PdVPgkNDi

They call that a Nelson Mandela statue.. 😂 😂 😂 pic.twitter.com/RAp99FGHwx

SA really convinced the UN that the statue we gifted them is of Mandela and not Robert De Niro. pic.twitter.com/RrCB1CUigt

😂😂😂😂😂😂😂😂😂😂😂😂Guys even the First Lady can’t believe you call that thing Mandela’s statue!! She looks back at Bae like, bruh are you sure ka this thing? #UNGA2018 #Mandela100 pic.twitter.com/khgrFPZLiG

According to the presidency the 1.9 metre tall sculpture is the only life-size statue at the United Nations headquarters.

The statue was created by Andre Prinsloo and Andre Otto. Prinsloo along with Ruhan Janse van Vuuren also worked on the 9 metre bronze Mandela statue at the Union Buildings in Tshwane.

Nelson Mandela's legacy lives on at the UN in New York

A life-size statue of the late former president Nelson Mandela was unveiled at the United Nations (UN) headquarters in New York in the US on Monday.
News
3 years ago

Taking a selfie with a lion and justifying it? Yep, Trevor has some issues with that.
TshisaLIVE
3 years ago

Trevor says America needs to still get to the point which SA reached with democracy where all people are equal.
TshisaLIVE
3 years ago