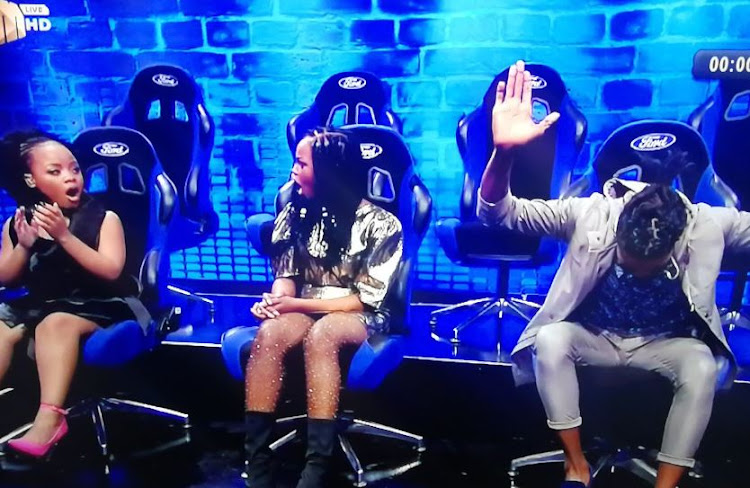 Thato (far right) made it through to the next round of the competition to the surprise of many.
Image: Twitter

Maybe it was something in the air or maybe he is set to pull off the greatest upset in Idols SA history, but Thato looked like he had risen from the dead to secure a spot in the next round of the TV music competition and some on the show could hardly believe it.

Sunday night's episode was lit AF with the show and several contestants trending on Twitter for much of the evening, which made it seem like it was the only program on TV.

One person who won the night was teen sensation Yanga who gave an incredible rendition of Try Sleeping With A Broken Heart by Alicia Keys.

Yanga all the way pic.twitter.com/PnZdn2uc2h

She took the whole auditorium to church, reaching notes higher than our neighbour after the dagga ruling.

Somizi was defeated by the performance and even wiped the floor with his jacket for her in praise.

The social media streets were also freaking out and declared it the best of the evening.

If Yanda doesn't win 2018 #IdolsSA, I will blame the South Africans. This girl can sing and perform @somizi pic.twitter.com/2eYiWwGG3P

But the real drama was when Thato somehow made it through to the next round, much to the surprise of Ntokozo and Thando who had the most priceless reaction in the world.

The internet was filled with memes about the narrow escape and some tweeps even wanted to start an official enquiry into how Thato keeps getting them votes.

Is anybody gonna talk about ntokozo and thandos reaction when thatos name was called 😂😂😂😂😂😂😂😂😂😂😂#idolssa pic.twitter.com/fAq4URoLuF

#IdolsSA when your table was set before your enemies and they didn't expect it 🤣 pic.twitter.com/4vRTwH8X1A

#IdolsSA who the hell keeps on voting for this Thato guy? pic.twitter.com/T4dm8JrJKc

Can somebody sign Thato!!! Like this guy is not Idol's material he's an artist already!! 😭😭😭😍 #IdolsSA pic.twitter.com/XHFPN2KQk5

#IdolsSA when girls thought Thato was not gonna make it. Kanti God is on his side team @Thato we voting for you again. pic.twitter.com/eidnUkabMM

Twitter already has a top three, but will there be a plot twist in the mix?
TshisaLIVE
3 years ago

Vosho dance moves & blindsides: Did your faves make it to the Idols top 10?

The streets feel played by some decisions.
TshisaLIVE
3 years ago