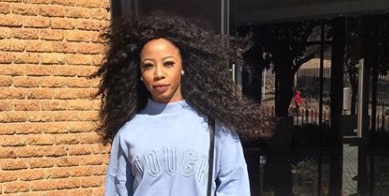 Kelly Khumalo is rumoured to be undergoing training to become a sangoma.

Kelly Khumalo's team have declined to comment on claims that she's heeded a call from her ancestors and is undergoing training to be a traditional healer, telling  TshisaLIVE that it is an extremely private matter.

The star sparked speculation when she posted a picture of herself in what followers believed was attire worn by traditional healers late last week.

The post was filled with fans who have been gifted with the calling and wished her well.

A source told Isolezwe Kelly is indeed undergoing training to become a sangoma but did not give any other details around the decision.

However, Kelly team said she does not want to speak on the claims and that she wants  to keep her private life out of the spotlight

"Kelly would like to keep her personal affairs private," her manager Linda Moeketsi told TshisaLIVE.

This is not the first time that Kelly has apparently had dealings with the ancestors.

In 2014, sangoma Dumezweni Mahabuke from kwaThema in Ekurhuleni told Daily Sun  that Kelly must thwasa or she would apparently never have peace.

Lerato Mvelase on leaving her kids for sangoma training: It was hard on them

The star left her children for 6 month t undergo training and says her daughter was restless and struggled to sleep while she was away.
TshisaLIVE
3 years ago

Mandla Gaduka on sangomas, job hunting & being booted off Generations

"This is the longest I have gone without a TV job," said Mandla Gaduka.
TshisaLIVE
3 years ago

Letoya Makhene: We don't accept killer 'sangoma', it is the work of a witch

Generations: The Legacy actress Letoya Makhene is so over traditional healers being painted with the same brush and wants the world to know that her ...
TshisaLIVE
4 years ago