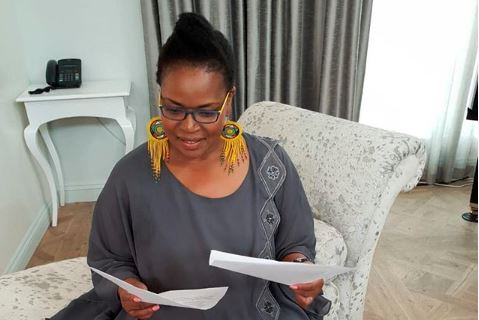 SA artists have formed a wall of protection around Florence Masebe who has been at the forefront of taking the plight of actors to parliament after the South African Arts & Culture Youth Forum (SAACYF) came for her on Twitter saying she's just a "celebrity".

The veteran actress, who has been speaking out about artists' rights for years came under fire from the organisation, which claimed the discussions should be held with their institution and not Florence.

The organisation replied to a tweet from Morning Show SA informing followers that Florence and Nathi Mthethwa would be in studio to represent artists' views.

They asked e.tv to rather invite organisations like theirs to carry the conversations.

@FloMasebe @NathiMthethwaSA Florence is an actor that we love but she does not represent any Organization.We are requesting your show to invite the organised formations like SAACYF & others. It can't just be abt Celebrities, we have youth who are as affected.What about our views? https://t.co/sKmpxgyOXu

While the SAACYF may have just been looking to get attention from the broadcaster, Florence was not willing to to be used for attention and hit back hard.

"I have never claimed to represent any formation. I use my voice because there's a void. In the face of huge injustice against South African actors. What we need is to be a united voice. I don't jostle for the spotlight. I simply exercise my democratic right to speak up," she said.

I have never claimed to represent any formation. I use my voice because there's a void. In the face of of huge injustice against South African actors, what we need is to be a united voice. I don't jostle for the spotlight. I simply exercise my democratic right to speak up.

Bonnie Mbuli was one of the first to tell the organisation to leave Florence alone because she was honouring a hard call by speaking up.

Florence added that they were a nuisance that aims to disrupt the movement that has gained momentum since they spoke in parliament last month.

Actors such as Clement Maosa, Slindile Nodangala and Bridget Masinga were among the many artists, who strongly defended Florence and told the SAACF where to get off.

They are an annoying lot. They aim to distract and they won't win. I wish them well in their programmes. They should not try to use my name to seek attention.

The reason why we’re in this predicament is because of all these formations that are formed and don’t do the works,all they do is complain,why can’t you support what she’s doing for the industry at least she’s being proactive,stop complaining unnecessarily.

Your shortsighted views and thirst for the spotlight is exactly what will hinder the progress of this very necessary fight for artists rights. Instead show solidarity and support Flo who has the media’s ear and heart @Saacyf you’re being silly https://t.co/KtsoKTVcKH

WATCH | Babes Wodumo gets candid on the hot seat