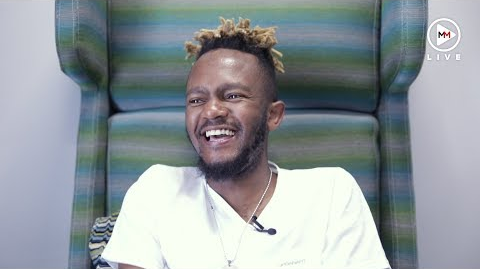 To make his dream of becoming a rapper a reality Kwesta has had to make many sacrifices along the way, which include running away from home and dropping out of school at 16.

Now more than a decade later and with several multi-platinum hits under his belt, school is something the Vur Vai hitmaker is willing to reconsider.

Kwesta said his passion didn’t allow him to stay in school and watch his dreams go by but he’s never disregarded the importance of education. Chatting to TshisaLIVE the rapper reminisced on the rift his decision to drop out had on his relationship with his mom.

“I was stubborn. And, I was raised by a single mother who had other dreams for me and they were mainly academic. I didn’t share those dreams and I was stubborn about it. So much so that we didn’t get along for a while. I stopped living at home basically ran away and I went to live in the studio where I recorded the first demo...the one I sent to Slikour and Shugasmakx.”

The rapper also pointed out that dropping out had nothing to do with his intelligence or ability to grasp things at school.

“After I ran away from home I dropped out of school and just stopped going to classes. I did that because every time I went to school I didn’t want to be there because I knew that I was wasting my time. Like I’m not too dumb… I wasn’t doing too badly at school. It had nothing to do with that, I didn’t find things difficult or anything like that.”

Kwesta said now that he is older he and his mom have a much better relationship.

He said looking back he couldn’t fault his mother for having more “academic” dreams for him because of how she was raised and what she was taught.

“It’s not really their fault. If you think about it, we were raised by people who were taught that children have to end up as teachers, nurses, policemen and doctors. Anything else was crazy, so they wanted us to be better than they were.”

However, God-willing Kwesta’s mom might live to see her son acquire some kind of academic accolade, he just has to figure out where his passion will lead him.

"I’ll probably go back but for the moment I don’t really know what I would study. I’m not really in that space right now where I am really thinking about it but it will happen at some point. I know that at some point there’s not going to be a Kwesta, it will stop. That is just the reality, eventually it will stop and I’ll want to do something else.”

Kwesta said he wasn’t tryin’ to be here in 2048 still rapping… so school is an idea he’ll keep watering till it materialises.

“I mean I could rap at 60 but I just don’t see myself as a rapping 60-year-old. I don’t wanna be a Snoop Dog. I wanna retire somewhere and just chill and an education will come in handy.”

The father and son duo said they've brought out the best in each other.
TshisaLIVE
3 years ago

Musa Sukwene: It took months for me to return to stage after Robbie’s death

"It took a while. I think I spent over a month in studio not doing anything."
TshisaLIVE
3 years ago

"I have known both sides of midnight and know what it feels have been treated like you are less of a human."
TshisaLIVE
3 years ago