Kelly Khumalo on haters claiming Chad Da Don will die for working with her: Voetsek 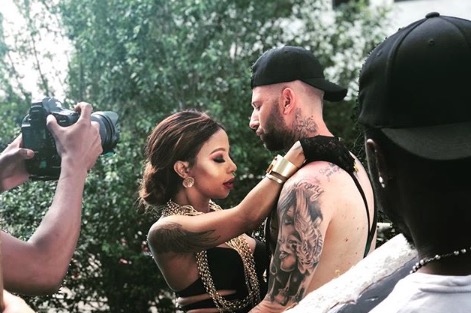 Kelly and Chad on the set of the music video for Dance Comigo.
Image: Kelly Khumalo Instagram

Every time Kelly Khumalo is seen with a new guy, be it a work colleague or just a pal, haters say she is cursed and the dude will die.

Kelly is tired of the hate and after posting images of herself with Chad Da Don, who features in her new music video Dance Comigo, the haters were already in line waiting to spill the bs.

But Kelly, who doesn't often reply to the comments, posted a video poking fun at the hate.

She first told them to "voetsek" and then said "If you say I am as powerful as I am, how much are you saying about me?"

The video got over 12,000 views in less than an hour. Kelly also commented on those who felt the need to remark on her cellulite.

Watch the video below. Oh, and check out the awesome snaps from the music video.

Shirts off. Booty on display. Kisses. Yup, this is going to be a winner.
TshisaLIVE
3 years ago

Thanks bye 👋🏾 #DanceComigo out on ITunes #LinkInBio