#IdolsSA | Has 'overrated' King B let his crown slip? 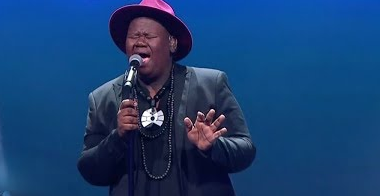 Was King B shouting or singing?
Image: Supplied/ Mzansi Magic

As Idols SA enters its last few weeks, the race to win the crown is heating up and it seems the internet is not convinced that it will be King B that will come out victorious.

From the moment he opened his mouth during auditions week, King B has been a firm favourite. His singing voice, sassy attitude and vosho skills made everyone want to be his friend.

But young gun Yanga and Thato have been giving it their all and have emerged as front runners.

Yanga won over judges again with What Is Love by the Empire cast and Whitney Houston’s I Will Always Love You. Beyoncé's dad Matthew was on the judging panel for the week and heaped her with praise.

"You were a star!” he declared after one of her performances.

While Thato has been peaking at just the right time and took the first round with a rendition of The Soil’s Inkomo. He followed it with Imibuzo by Nathi, which won over even Randall.

“You are the one performer who sees beyond this competition and you’ve got the biggest smile of all the contestants.”

But it was King B's performance of Beyoncé's Irreplaceable and  A Great Big World's Say Something that really got people talking.

While some praised his vocal range others hit the mute button because he was "shouting".

#IdolsSA Thato is way better than king B let's not lie pic.twitter.com/NxPUFfnDJ3

#IdolsSA king B fans trying to stand by him after horrible performance pic.twitter.com/Bwf99GnMhS

#IdolsSA Am I the only one who's noticing hore Thato is better than King B pic.twitter.com/AgXn2aQo77

#IdolsSA King B killed it, he sang that song better thn Beyonce don't @me😍😍

My disappointment when King B was performing irreplaceable 😭🤦‍♀️#IdolsSA pic.twitter.com/KwDJ777M8Q

Others were just concerned about the colour of his neck- how strange?

King B's hat and his neck have the same colour. 😅😅😅 #IdolsSA pic.twitter.com/zIV1Yt7VR9

It seems Yanga is already in there with the SA muso superstar crew.
TshisaLIVE
3 years ago

Can we have an audit on who keeps voting for Thato?
TshisaLIVE
3 years ago