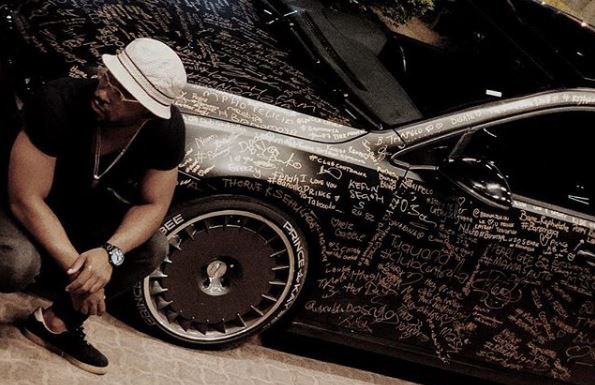 Popular DJ Prince Kaybee has come up with a clever idea to show his appreciation to fans by getting them to sign his car.

While his fans across the country have been approaching Prince Kaybee for his autograph, the star has turned the tables on them and asked them for theirs.

Speaking to TshisaLIVE Prince Kaybee said he wanted to show his appreciation to fans who had supported his career up until now and had a brainwave.

"I have always tried to involve my fans in my life and, at the same time, move the support forward. That was when I thought they should sign something. T-shirts and CDs are overrated. So I put my car on the spot and see how this goes."

The reaction so far has been overwhelming.

Prince Kaybee SA on Instagram: “TouchDown #Botswana, this is how it...

He said the idea is to buy his album and then go next door to the store where you buy it and sign the car.

"If the car is full, We'll be filling another car. If we need to give them another car, why not. I am nothing without my fans.

He said the signatures were in permanent marker and he wanted to ride the same car to "travel with his fans".

"It is like I am wearing my fan's pride. I am showing off with all the love I have been getting. A year from now I will be driving it still because it is my personal car."

HHP wanted to develop an academy for music before his death.
TshisaLIVE
3 years ago

I don’t want to be Black Coffee, says Prince Kaybee on comparisons

Prince Kaybee wants to carve his own lane.
TshisaLIVE
3 years ago

A video of the four men serenading the world has gone viral.
TshisaLIVE
3 years ago