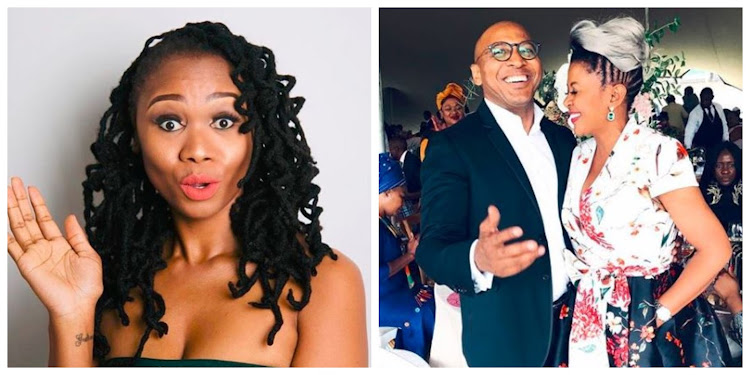 Jackie Phamotse's latest book 'I tweet what I like' may land her trouble with the Kumalos.
Image: Instagram/Jackie Phamotse/Basetsana Kumalo

Jackie Phamotse has released the cover of her latest book, I Tweet What I like..So Sue Me, which suggests she's ready for round two with Basetsana and Romeo Kumalo after they took her to court for her tweets earlier this year, reports Sunday World.

In July, Basetsana and Romeo were granted a protection order against Jackie by the Randburg Magistrates Court. This after, the court found that a tweet Jackie shared about "a media mogul" and her husband allegedly being involved in a gay sex tape resulted in widespread speculation, implicating Basetsana and Romeo.

Jackie was instructed by the court not to mention Basetsana or Romeo on social media or make any allegations against them.

Speaking to Sunday World, Basetsana and Romeo's lawyer Ian Levitt said the Kumalos were ready to take on Jackie if she breaches the court order in any way.

"There is a court case order against Phamotse and criminal charges have been  laid against her. If she breaches the court order in anyway, our client will take action against her both civil and criminal in nature. If Phamotse has no regard for court orders, then she behaves at her peril," he told the paper.

Bassie has labelled the ruling a victory.
TshisaLIVE
4 years ago

The paper also reported that Basetsana had opened a new case at the Midrand police station against Jackie for violating the court order.

Jackie told TshisaLIVE that she was gatvol about of talking about the saga and that nothing had been served to her yet.

"I really can't talk about it anymore at this present moment. I don't know yet if they have served the papers, it's Monday morning so I have no idea..." she told TshisaLIVE.

Jackie said she's ready for anything as far as legal routes are concerned and that she was not going to back down. Her book will only be available next year February but is now available for pre-order.

Chatting to TshisaLIVE a day before her book launch for I Tweet What I Like,  Jackie opened up about how she had to get police to escort her after she she was "followed" by two strange cars.

After the controversy that was sparked by Bare the internet has been waiting in anticipation for the big reveal.

"I know that it is obviously because I have said my upcoming book will have real names in it. I'm launching the book on Thursday. I believe this was them trying to somehow get information or prevent the book from coming out completely or to sabotage it somehow," she said at the time.

'Ale Duma E' has pushed Lection straight back to the top & he's ready for it!

While it may have looked like Lection is out of the game, mans is reclaiming his throne
TshisaLIVE
3 years ago