Mboro said Bushiri did promise to gift him with a milli but it wasn't for him, it was for charity 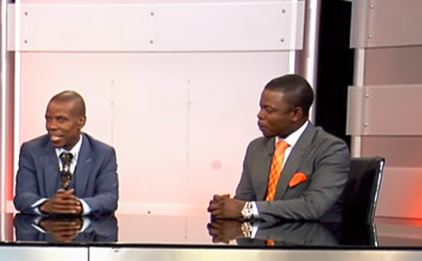 Prophet Shepherd Bushiri and Prophet Paseka "Mboro" Motsoeneng have talked out their differences and buried the hatched.
Image: Via YouTube/SABC

Pastor Mboro has rubbished rumours that Pastor Bushiri gave him R1-million as a gift for his birthday.

The pastor told TshisaLIVE that Bushiri made a promise to contribute R1-million before the end of week as partnership to the #Mboro50years birthday celebration.

"Our relationship started five months’ backs. He came to me for support and I was there to help. It's not my birthday gift but it's for charity."When asked what he thought of Bushiri's gesture, Mboro said he was grateful for it and believed it also had something to do with how he supported him (Bushiri) in his time of need.

"He was also honouring me for standing by him when people were trying to destroy and dent his name. It's painful to be in a hectic situation alone. I was the only prominent South African prophet who supported him," Mboro said.

The Incredible Happenings Ministries pastor explained that he planned to use the money to help those in need.

"I have set aside R1,2m for tournaments, building house and helping families to bury their loved ones. I'm waiting to proceed with building houses for people. R1-million from Bushiri will be included in the R1.2-million that I have saved for the projects."

Mboro and Bushiri only recently put their differences aside to work together as pastors.

The two charismatic church heavyweights, who had been publicly crucifying each other and often skewered each other in their sermons for five years been, made up just a few months ago.

They told Sowetan that it was for the benefit of the kingdom of God that they were both serving.

"I feel it's a great achievement and honour to the body of Christ. It is the way things must always be. Men of God must reconcile and serve God in unity. We serve the same God," they said at the time.