Meanwhile, B's team have revealed that the matter has been "settled in some respects" 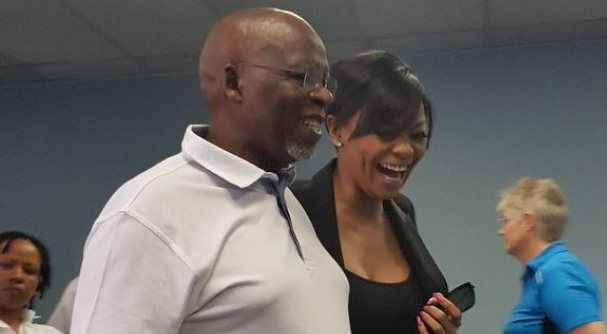 Bonang leaves the Specialised Commercial Crime Court with her stepdad on Wednesday morning.

TV star and businesswoman Bonang Matheba was all smiles as she left the Johannesburg Specialised Commercial Crimes Court where she appeared on tax fraud allegations on Wednesday morning.

Bonang told journalists outside court that she felt positive and that "life is good".

Bonang's lawyer Charl Coetzee told the court that the star's team has had several discussions and were in the process of making representations to the state.

She is sporting a short haircut, jeans, black top and shades. She looks relaxed and confident as she speaks to her legal team #Bonang #BonangMatheba pic.twitter.com/DhaIpyYdcP

Charl said they would complete these representations within the next 12 days and asked for a further postponement on the matter until November 27. This request was granted by the court.

Bonang, who was flanked by her manager Davin Phillips and her stepdad, Joe Mokoena  looked relaxed in a pair of jeans, black shirt and sunglasses. She took instructions from her lawyer several times before proceedings started, with Charl meeting with a representative of the state as he waited for court to begin.

Outside the court Bonang breezed past waiting journalists and when asked how she felt said she was "positive".

B walks out of the courtroom with her dad. She tells the waiting throng of journalists that she is positive and "life is good" #Bonang #BonangMatheba pic.twitter.com/fo5ZI6zVNu

Bonang's manager Davin told TshisaLIVE that the matter had mostly been resolved and the star was working with a "great team" to fix the matter.

"It is settled in some respects but we feel it will be inappropriate to comment further at this stage. She has appointed the right team to meet with Sars to resolve this. Bonang is a law abiding citizen and this is a matter she takes very seriously. She is positive that it will be resolved soon. We are all positive."

Davin would not be drawn into commenting on the amount owed by Bonang.

Bonang's lawyer also declined to comment on whether the amount would be settled at her next court appearance.

Bonang missed a previous appearance on September 27 with her legal team arguing that she was not able to attend as she was invited abroad and gave a short description of her itinerary.

Speaking to TshisaLIVE at the time, Bonang's management said as much as they were surprised by the situation, she would comply with Sars and allow the law to take its course.

"The recent enquiry came as a surprise to Ms Matheba, nonetheless Ms Matheba has full respect and will comply with Sars, the South African legal system and processes," Davin said.

Bonang Matheba's court case has been postponed to November 14.
TshisaLIVE
3 years ago

The star will have to appear in person today or a warrant will be issued for her arrest.
TshisaLIVE
3 years ago