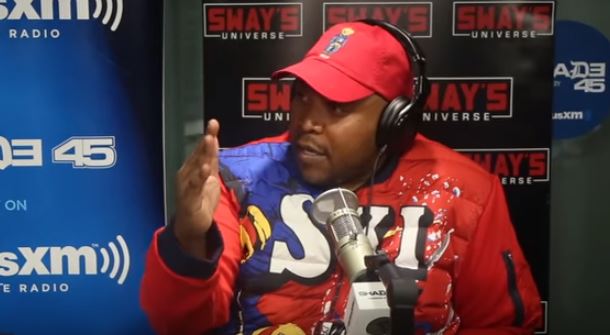 Rapper Tumi Molekane aka Stogie T did Mzansi proud this week when he took a seat on popular radio breakfast show Sway In The Morning and dropped some serious bars.

Stogie spoke to host Sway Calloway about his break into the industry, ProKid, Skwatta Kamp and the culture in Africa.

He also cleared the air on the "beef" with Cassper. Cassper called Tumi out at the SA Hip- Hop Awards last year for suggesting that he had "made him".

Tumi explained to Sway that he put Cassper on a tape when he was coming up but the Doc Shebeleza star was "a product of HHP".

Stogie ended his time on the show with a deep freestyle that had the whole studio stanning.

His freestyle hit deep on inequality and privilege.

"I am from the continent of poverty and long walk accomplishments. Where fallen heroes give birth to spoilt rotten kids. Where the opulent meet the poor cleaning their offices. We push rocket ships like Elon Musk, charge the whip but still stuck in sh*t because we don't have a pot to p*ss in.

"God forgives as you give the church half your sh*t. Still we can't tell a pastor from a pimp..."

And it just got so much better from there!

The streets were left defeated by the freestyle with rapper Reason claiming it was the genius old school Tumi in the chair.

"First and foremost. I dont give a f**k what you say. That was Tumi, not Stogie T. Damn you Tumi Molekane. Secondly, what a great verse. A true reminder of the Godly writer I looked up to coming up and even had a chance to meet and break bread with over time. Dankie Stogie!" Reason wrote on Twitter.

"Sway, i put your certified hyenas in elephant graves" pic.twitter.com/xhkZWCbkxc

So my don Stogie T @TumiMolekane said "..& I wrote above their heads like Anne Frank" 💣..then a few bars later he said "..who's sayin (Hussain) l can't hang on camera?"...💀..I can bet real £ those punches flew over a lot of heads like a drone.

Ayo Stogie T deserves to be heard.
SA Artists on Sway's Universe rank:
Nasty C
Stogie T
AKA
I'm not hating on Cass, but we can agree his time on Sway was.....uneventful.

The world does ITSELF a disservice when it keeps us out. As Africans, you can sleep on us, you can ignore us... But our dopeness, is UNDENIABLE. SUPREME!! STOGIE T! SWAY! Thank you for the reminder!!! Fire emojis!!! pic.twitter.com/TROf6dWhDU

The whole world must hear this shiid. Stogie T on sway, just listen to this 😱😱😱pic.twitter.com/WwEg1vJWp8

No rapper in SA is better than Stogie T lyrically.

Me watching people acting shocked about that Stogie T freestyle..knew before he even went on Sway that he will murder it.. pic.twitter.com/NptUcMfhFj

Cava the full interview and freestyle in the video below.

Some of South Africa's biggest hip-hop talent has graced the mic on Sway Calloway's US Sway in the Morning radio show, but only one artis has made ...
TshisaLIVE
5 years ago

WATCH: The Nasty C freestyle that made Sway lose his mind

Legendary US radio star Sway Calloway was blown away by SA's Nasty C when the young rapper made an appearance on Sway in the Morning this week.
TshisaLIVE
5 years ago